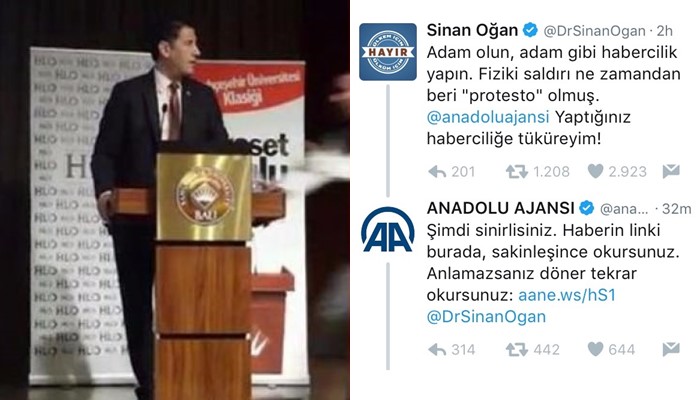 The state-run Anadolu news agency on social media insulted Sinan Oğan, a former Nationalist Movement Party (MHP) deputy who was attacked on Sunday at a private university when he was making a speech against a proposed constitutional amendment package that will be voted in a referendum in April.

“Be a man, write the story decently. When is a physical attack called a ‘protest’?” Oğan said on Twitter in reaction to the Anadolu story about the attack on him. “I spit on your story,” added Oğan.

In response, Anadolu, which is directed by a former advisor of President Recep Tayyip Erdoğan, posted a tweet below that of Oğan: “You are angry now. Link to the story is here. You can read it when you calm down. If you do not understand it, read it again and again.”

Oğan protested the tweet, sharing it with Deputy Prime Minister Numan Kurtulmuş. After growing reactions, Anadolu deleted the tweet. Oğan also posted a message expressing his thanks to Kurtulmuş.

Oğan, a politician who was expelled from the MHP, was attacked while campaigning for a “no” vote in the upcoming referendum that will bring an executive presidency to Turkey.
A young man rushed on to the stage and attacked Oğan while he was on the podium at İstanbul’s Bahçeşehir University.

The Anadolu news agency has been at the center of debates in recent years for acting as private news agency of President Erdoğan and the Justice and Development Party (AKP) government.