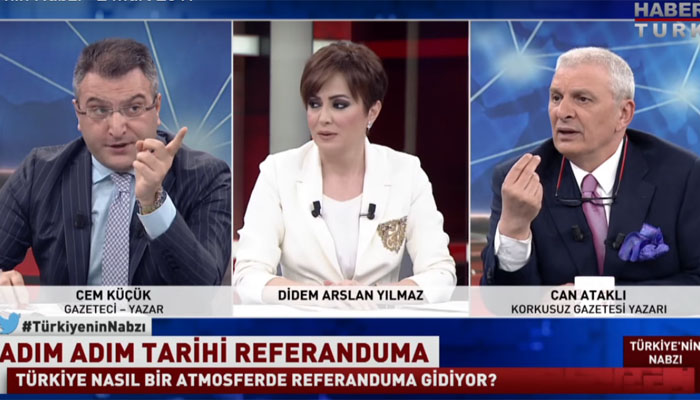 Cem Küçük, a columnist with the pro-government Star daily who is known for his social media attacks on government critics and also as a staunch supporter of President Recep Tayyip Erdoğan, attacked Korkusuz daily columnist Can Ataklı for comments criticizing Erdoğan and said he could finish off his career within five minutes.

Speaking during a TV show on the HaberTürk news channel on Thursday night, Küçük targeted Ataklı, who had criticized Erdoğan for promising to end terrorism after an April 16 referendum that will switch Turkey to an executive presidency, saying he makes such promises before every election.

“You claim that the state exploded bombs [that were used in terror attacks]. This is a constitutional crime. If you dare, say ‘Erdoğan exploded them.’ I know you mean it,” Küçük told Ataklı.

After a battle of words during the TV show, Küçük claimed that he saved Ataklı’s career once and said: “Similar to Tolga Tanış, ByLock İsmail [Saymaz] and Hande Fırat, you may also be finished. You are here because of me. What do you think you are? You have five minutes [to be finished].”
In January, Hürriyet, the flagship newspaper of the Doğan Media Group, replaced its Washington, D.C., representative, Tolga Tanış, who came under fire from pro-government circles after his reporting on Turkey’s alleged raw materials supply to the Islamic State in Iraq and the Levant (ISIL).

Saymaz, known for his staunch criticism of the ruling Justice and Development Party (AKP) government, was barred from Doğan group and pro-government TV stations as a commentator after conducting an interview with the owner of a smart phone application known as ByLock, which has caused the dismissal and arrest of thousands of civil servants since Turkish authorities believe it was used as a communication application between followers of the faith-based Gülen movement, which is accused by the AKP and Erdoğan of being behind a failed coup last July.

An İstanbul prosecutor has launched an investigation into the Hürriyet daily due to Saymaz’s interview.

Following a recent report by Hürriyet’s Ankara Representative Fırat last Saturday in which anonymous military sources responded to criticism suggesting that the Turkish General Staff is too close to the AKP government, a prosecutor launched an investigation into the Hürriyet daily, and its editor-in-chief, Sedat Ergin, was replaced by former Milliyet daily Editor-in-Chief Fikret Bila on Monday.

Pro-government media outlets claimed that Fırat also resigned as Hürriyet’s Ankara representative; however, she said on Twitter that she is still in her position.