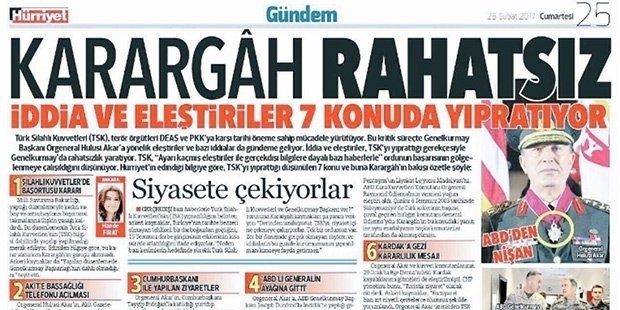 The Bakırköy Chief Public Prosecutor’s Office has launched an investigation into the Hürriyet daily over a report published on Saturday in which anonymous military sources responded to criticism suggesting that the Turkish General Staff is too close to the ruling Justice and Development Party (AKP) government.

The report, which was written by Hürriyet’s Ankara Representative Hande Fırat, was titled “The [military] headquarters is restless,” which meant to say that the General Staff was disturbed about such criticism and found it without merit.

The investigation into the daily was triggered by a criminal complaint from an academic at İstanbul University, Mehmet Hakan Sağlam, according to Turkish media reports.

In his complaint, the academic claimed that the news report shows a junta group within the Turkish Armed Forces (TSK) is still active, and that they should be found out and punished on charges of attempting to destroy the Turkish government by use of force.

Some government figures criticized the Hürriyet daily for its report, claiming that the daily’s headline was reminiscent of the “Young Officers Are Restless” headline that appeared in the Cumhuriyet daily in May 2003 shortly after the AKP came to power as a single party government. The Cumhuriyet’s news report hinted at a military intervention because military officers were uneasy with the practices of the AKP government.

Speaking in Ankara on Sunday, Prime Minister Binali Yıldırım did not mention the name of Hürriyet but said there were efforts to intimidate the government with headlines and that such efforts were the result of a perception management operation.

Justice Minister Bekir Bozdağ also criticized Hürriyet on Sunday for its report. Writing from his Twitter account, Bozdağ said: “It has been years since the era of getting results and intimidating Turkish governments with headlines has been closed. But there are still some whose old habits have resurfaced and who dream of an old Turkey. Turkey is not the old Turkey. Have you still not understood this? “