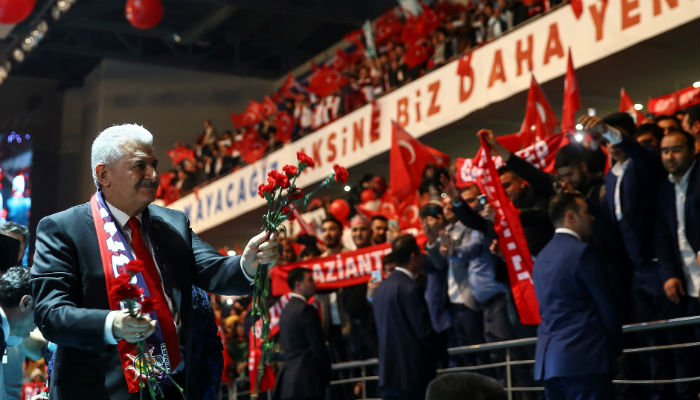 The ruling Justice and Development Party (AKP) government has launched its official campaign in Ankara for a public referendum to be held on April 16 on a constitutional reform package that will introduce an executive presidency in Turkey.

An introductory ceremony was held at the Ankara Arena Sports Hall on Saturday with the attendance of party supporters from across the country.

Among the participants of the event was former Parliament Speaker and AKP deputy Bülent Arınç. Former Prime Minister Ahmet Davutoğlu and former President Abdullah Gül did not attend due to their schedules.

Delivering a speech at the event, Prime Minister Binali Yıldırım talked about the content of the constitutional reform package and asked for a “yes” vote in the referendum.

The AKP, backed by the Nationalist Movement Party (MHP), pushed through the legislation that President Recep Tayyip Erdoğan says will bring the strong leadership needed to prevent a return of the fragile coalition governments of the past.

The Republican People’s Party (CHP) and HDP fear the reform will fuel authoritarianism.