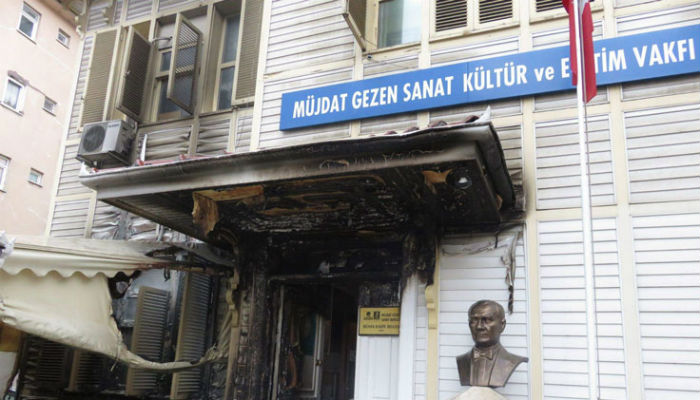 A man named M.A. Aligül, who is suspected of having set an arts center in İstanbul’s Kadıköy district belonging to famous critical thespian Müjdat Gezen on fire, was detained on Wednesday evening.

The Doğan news agency reported that the 39-year-old Aligül will be interrogated in the counterterrorism unit.

The suspect shared a message on social media following the fire at the arts center on Sunday night, saying that anyone who defames the Ottoman Empire would die.

Gezen told the Sözcü newspaper on Monday that the incident at the Müjdat Gezen Arts Center was an arson attack and that security camera footage shows a man with a beard entering the street at night with a plastic container filled with gasoline.

The security camera footage, which was made public on Monday, morning confirms Gezen’s claims as a fire breaks out at the arts center after the man pours gasoline from the plastic container.

Firefighters immediately extinguished the blaze after they were called by neighbors.

Gezen is known as a Kemalist government critic.

In the meantime, the staunchly pro-government Yeni Akit daily attracted widespread criticism on social media for the way it covered the fire at the Müjdat Gezen Arts Center.

“Great shock to ‘pimp’ Müjdat,” wrote Yeni Akit in the headline of its news report.