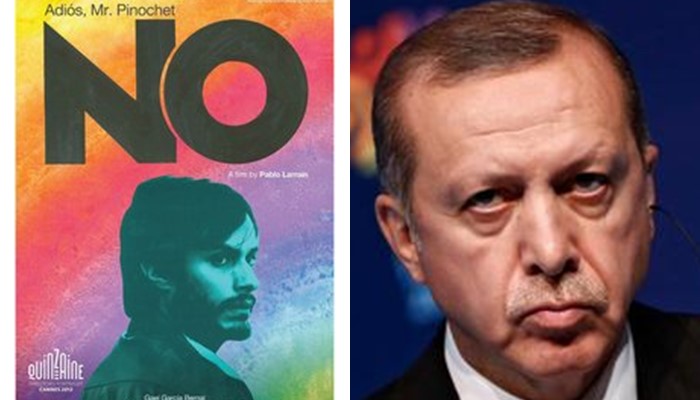 Turkish digital platform Digitürk has removed the movie “No,” which tells the story of a plebiscite in Chile in 1988 on the removal of dictator Augusto Pinochet, from its lineup as Turkey campaigns for votes in an April 16 referendum on constitutional amendments that will open the way to a switch from a parliamentary system of governance to an executive presidency, Cumhuriyet reported.

“Platform removed the film from its lineup on Thursday,” wrote Çiğdem Toker in her column on Sunday, underlining that Digitürk is owned by a company of the Gulf state of Qatar, with which President Recep Tayyip Erdoğan has had close relations, especially in recent years.

Released in 2012, the movie “No” captures a historic moment in advertising tactics in political campaigns in which the advertising team, although targeted and intimidated by the authorities, takes a lighthearted, upbeat promotional approach stressing abstract concepts like “happiness” to challenge concerns that voting in a referendum under a notoriously brutal military junta would be politically meaningless and dangerous.

Through a series of entertaining and insightful presentations that had an irresistible cross-demographic appeal, the “No” side of the referendum is successful in ousting Pinochet from power, leading to the holding of democratic elections the following year.

Noting that the main opposition party Republican People’s Party (CHP) was expected to use the same tactics ahead of the referendum, Toker evaluated the removal of the film as another sign of the pressure on naysayers.

President Erdoğan and the ruling Justice and Development Party (AKP) are pursuing an aggressive policy of propaganda ahead of the referendum.

Last week President Erdoğan said: “April 16 will at the same time be an answer for July 15. It will be an important move against July 15. The position of naysayers is to take sides with July 15.”

Antalya Deputy Public Prosecutor Cevdet Kayafoğlu tweeted on Friday that those who vote “no” in an upcoming referendum for a constitutional amendment package which will switch Turkey to an executive presidency will be treated as members of the outlawed Kurdistan Workers’ Party (PKK).

Zekeriya Çamlıbel, national education director in the Pamukkale district of Denizli province, said the referendum on April 16 is the last opportunity to take the country back after 90 years of a “break,” in a veiled reference to the Turkish Republic, established by Atatürk, Cumhuriyet reported on Friday.

The Doğan Group’s Hürriyet daily refused to publish an interview with Orhan Pamuk, Turkey’s most famous writer and a Nobel laureate in literature, because the author expressed his objection to the constitutional reform package.

Turkish Bureau Union (Türk Büro Sen) Chairman Fahrettin Yokuş, who called on people to say “no” in the April 16 referendum, was the target of gunshots in Ankara on Saturday.

Some banners and brochures put out by the Konya Public Healthcare Directorate as part of the Health Ministry’s efforts to discourage people from smoking have been removed for fear that they may promote a “no” vote in a public referendum to be held in April. The banners and brochures, which say “No to smoking” and “If you say ‘no,’ you have gained your future,” have been removed from various locations in Konya.

Many people believe that the constitutional amendments will pave the way for a one-man regime under Erdoğan, who has already been criticized for being authoritarian as he has purged and jailed countless thousands of critical academics, politicians, teachers, doctors, officials, businessmen, artists and journalists.