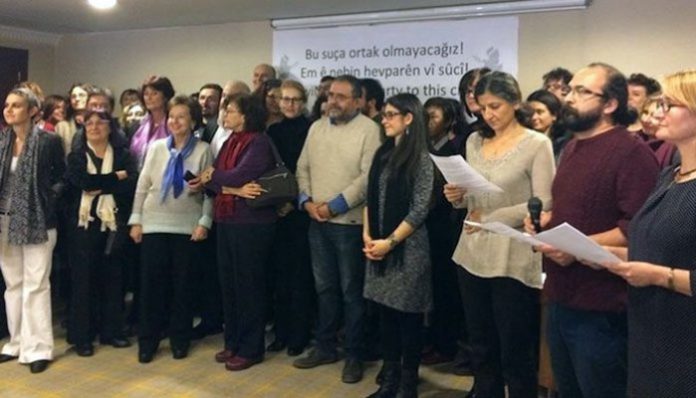 Defending a recent purge of academics, President Recep Tayyip Erdoğan said academics must also pay the price of their mistakes just as others do, Hürriyet reported.

Three hundred thirty academics were dismissed from their jobs by a government decree issued on Feb. 7.

“If politicians, bureaucrats and technocrats must pay the price for the crimes they committed, shouldn’t professors, assistant professors and doctors pay, too?  No offense! If they are part of efforts to divide my country, if they are linked with ‘FETÖ’ [derogatory term for the Gülen movement] or the PKK [Kurdistan Workers’ Party] of course they have to pay a price. In such cases whatever is legally necessary must be done. No one should be uncomfortable with this,” said Erdoğan to a group of journalists on a plane returning from a visit to the Gulf States.

One hundred fifteen out of 330 academics who were dismissed from their jobs by the government decree were signatories of a peace declaration criticizing curfews declared in Turkey’s predominantly Kurdish southeastern districts in 2015.

In one speech earlier in 2016, Erdoğan accused the academics of being a fifth column of foreign power determined to undermine Turkey’s national security. He also used many insulting words to describe the academics such as “immoral,” “vile,” “disgusting,” “ignorant” and “traitor.”