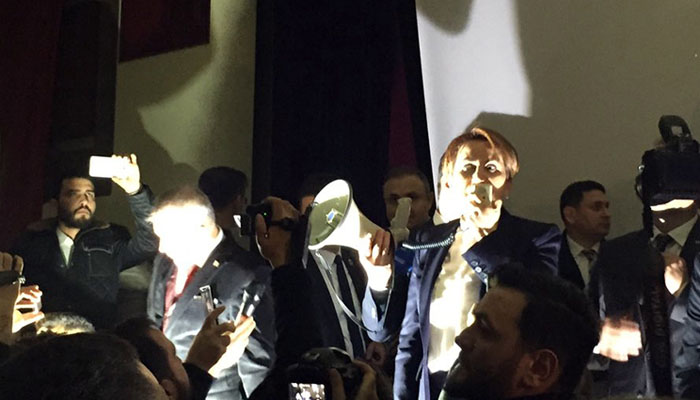 The management of a hotel in Çanakkale where former candidate for leadership of the opposition Nationalist Movement Party (MHP) Meral Akşener was forced to address party members in the dark on Saturday apologized to her for power cuts during her speech.

In a statement on Monday, the Kolin Hotel said the contract between the hotel and the other party was canceled unilaterally after a disagreement occurred over security at the gathering.

“We talked with the association management and Mrs. Akşener regarding the inconveniences [that occurred at Saturday’s gathering] and apologized. We also thanked them for the understanding and responsible attitude they showed. We would also like to thank our guests from Çanakkale who attended the gathering,” the statement said.

Akşener has been waging a campaign against incumbent MHP Chairman Devlet Bahçeli, who is a supporter of a switch to an executive presidency in Turkey. Akşener, on the other hand, opposes the changes to the constitution that will be voted in a referendum on April 16.

Speaking under the light of mobile phones in Çanakkale on Saturday after hotel management cut the power, Akşener said her legal meeting was interfered in by the power cut but vowed to continue her “struggle for democracy.”