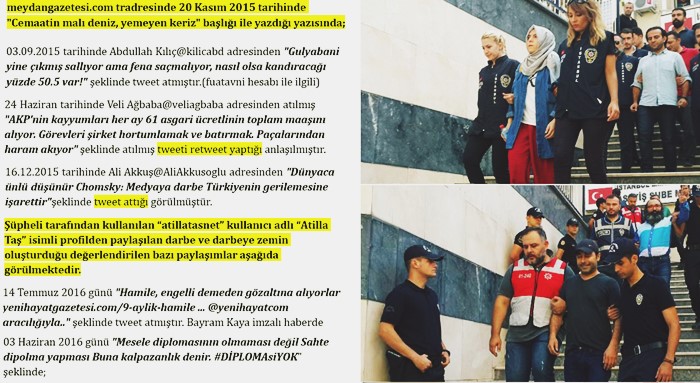 An indictment of 29 journalists, 25 of whom are jailed, was accepted on Monday by the İstanbul 25th High Criminal Court, seeking up to 15 years’ imprisonment for the suspects including former singer Atilla Taş.

The journalists are expected to appear in court between March 27-31.

For instance, former Habertürk editor Abdullah Kılıç is being indicted for his critical columns in the now-shut-down Meydan daily as well due to testimony from former Habertürk colleagues. Yasemin Çetin, who used to be a reporter for Habertürk, said in her testimony that rumors had circulated about Kılıç’s connection to the Gülen movement, which is accused in the indictment of being a terrorist organization under the name of “FETÖ,” a derogatory term coined by the Justice and Development Party (AKP) government to refer to the movement.

Another witness and former Rota Haber employee Şevket Taner Şahin said the website published interviews with famous soccer player Hakan Şükür and former singer Taş, who are considered to be connected to the Gülen movement. The prosecutor included such testimony as evidence of membership in a terrorist organization as well.

Taş, another person named in the indictment, is also accused because of his critical tweets and columns in the Meydan daily. Taş was a popular figure on Twitter and for a while wrote columns for the critical newspaper.

Veteran journalist Ali Akkuş, who worked for the Zaman daily for years, is also being indicted, with even his retweets considered to be evidence of terrorist activity.
Akkuş was also accused in the indictment of sharing the column of jailed author Ahmet Altan on June 15, 2016.

Raising the issue of a corruption case that implicated the ruling AKP, President Erdoğan’s family and Iranian businessman Reza Zarrab, who bribed AKP ministers and is currently in pretrial detention in the US for violating Iran sanctions, is also cited as a red flag and connection to terrorist activity in the long indictment. According to the indictment, news coverage on Zarrab and the corruption case is considered proof of terrorist activity.
Under indictment are the following journalists, most of whom were employees of the Zaman media group, which was considered the flagship media organization of the Gülen movement:

In addition to stories, columns, TV commercials, Twitter messages and ownership of an account at Bank Asya are all deemed to be evidence of terrorist organization membership. The salaries of the employees of the Zaman media group used to be deposited in this bank, which was seized by the government prior to the coup attempt.
Another reporter, Bayram Kaya, is also charged of membership in a terrorist organization, with books he authored included in the indictment as evidence.

The indictment also mentioned that a dollar bill was found during the search of a reporter’s house, claimed to be evidence of links to the Gülen movement.
Gökçe Fırat, well known for his strong objections to the Gülen movement and his ultranationalist secular stance, is also named in the indictment due to his criticism of President Erdoğan. Taş and jailed columnist Murat Aksoy are also known for their affiliation with the main opposition Republican People’s Party (CHP).

According to a report published on Jan. 26 by new advocacy group the Stockholm Center for Freedom (SCF) 191 journalists are in jail, 92 are wanted and 839 have been charged in Turkey.