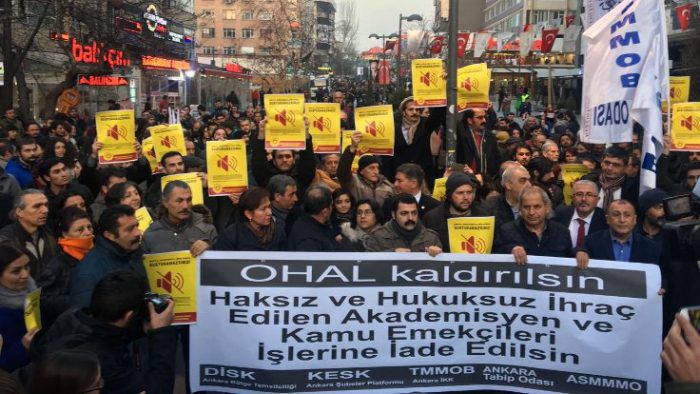 A group of civil society organizations in Ankara held a protest on Thursday in support of 330 academics who were dismissed as a result of a decree issued by the government on Feb. 7.

Representatives from trade unions such as the Confederation of Public Sector Trade Unions (KESK) and the Confederation of Revolutionary Workers’ Unions (DİSK) and professional associations including the Turkish Union of Engineers and Architects’ Chambers (TMMOB) and the Turkish Doctors Union (TTB) issued a statement in Ankara’s Sakarya Square urging reinstatement of the academics.

Meanwhile, a group of students at Ankara University called for the resignation of Rector Erkan İbiş, who approved the dismissals.

On Wednesday Turkey’s Higher Education Board (YÖK) said the names of academics who are purged from universities through controversial government decrees are determined by the university administrations themselves, according to BBC Turkish.

In the wake of growing criticism of YÖK due to the expulsion of thousands of academics from universities, YÖK’s press advisor, Şener Aslan, said: “It is the universities that have the final say over their expulsions. The names are determined by universities, and YÖK does not conduct any investigation in this regard.”

In another protest, a group of Boğaziçi University students issued a statement supporting dismissed professor of constitutional law Murat Sevinç, who also pens critical articles for the Diken news portal.

Professor Sevinç was dismissed from his position at Ankara University, but also gave classes at Boğaziçi University.