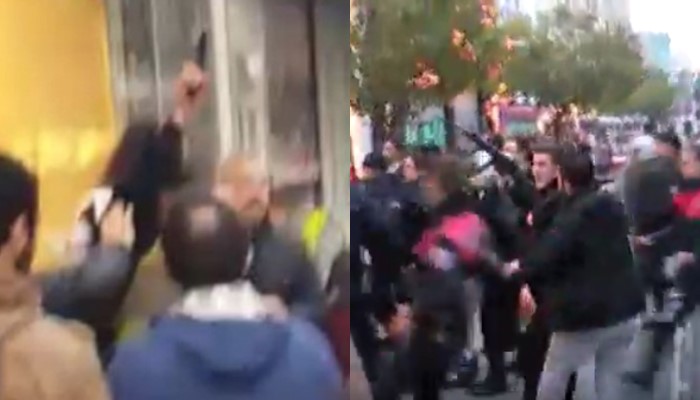 A Turkish police officer pulled out a gun on Saturday as protestors were calling on people to vote against constitutional amendments that will greatly expand the power of President Recep Tayyip Erdoğan, Cumhuriyet reported.

According to the report, police tried to detain a protestor in Kadıköy during a demonstration of about 100 people who delivered a statement condemning the constitutional amendments. Upon the reactions of other members of the group, police used pepper gas to disperse the crowd.

In the meantime a police officer was seen pulling out his gun against the protestors. Three people were detained by the officers.

The Parliamentary Assembly of the Council of Europe (PACE) Monitoring Committee expressed concern in a statement on Jan. 26 about the content of proposed constitutional reforms and the conditions under which a referendum will be held in Turkey in April.

The opportunity for debate on the constitutional amendments has been undermined because of the large number of NGOs, associations, foundations and media shut down under 19 decree-laws issued during a post-coup state of emergency, said the committee.

Unless the Turkish authorities can assure that the organization and conduct of the referendum comply with Council of Europe and Venice Commission guidelines as well as the principles enshrined in the European Convention on Human Rights, the committee “fears that the overall legitimacy of the process – and of the new constitution itself — could be put into question,” especially “in light of the current restrictions on fundamental freedoms in Turkey, notably the freedoms of expression, media and assembly,” and expressed hope that PACE would be invited to monitor the referendum.