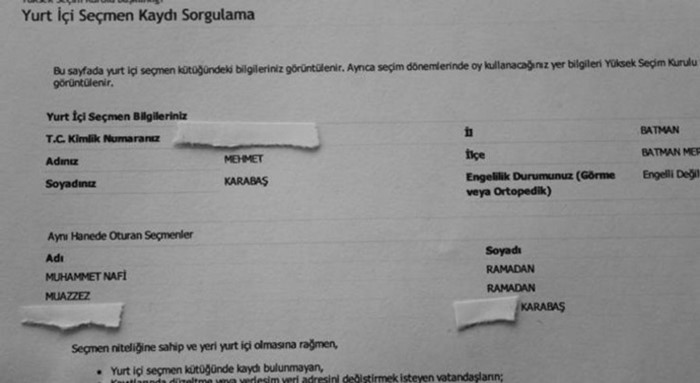 Two Syrian refugees are registered as voters in the southeastern city of Batman, the Evrensel daily reported.

According to the report, Mehmet Karabaş came across the names of Syrian refugees Muhammed Nafi Ramadan and Muazzes Ramadan while he was checking the voter registration at his home address.

“I informed the Population Directorate about the situation. They told they did not understand it but said the two seem to have been granted Turkish citizenship,” said Karabaş.

The Batman Governor’s Office had previously announced that Syrian refugees who comply with certain criteria would be able to acquire Turkish citizenship.

Turkey hosts about 3 million Syrian refugees. The citizenship of the refugees has been a matter of debate prior to elections in recent years.

Turkey is to hold a critical referendum over constitutional amendments that will greatly expand the power of President Recep Tayyip Erdoğan.