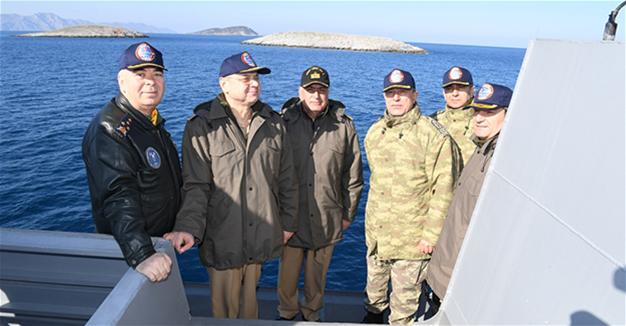 Turkish Chief of General Staff Gen. Hulusi Akar on Sunday paid a surprise visit to the disputed Aegean islets of Kardak at a time when relations between Turkey and Greece have been strained due to Greece’s refusal to extradite Turkish officers who are accused of taking part in failed coup attempt on July 15.

The Kardak islets, also known as Imia, lie just seven kilometers off the Turkish coast. Greece and Turkey, both members of NATO, have long disputed its sovereignty and in 1996 came close to war over the islets.

Accompanied by the commanders of the land, naval and air forces, Akar traveled to the islets of the Kardak region with two assault boats after conducting inspections on ships belonging to the Aksaz Naval Base Command, the Turkish military said in a statement on Sunday.

The military quoted Akar as saying that Turkey had always put importance on friendship and peace in all of its activities in the Aegean in terms of the mission to protect its interests at sea.

It also stated that the Turkish Armed Forces were continuing to increase its efforts to prevent “attempts against the nation’s rights and interests.”

Following Akar’s visit, Turkish media reports claimed that a Greek military vessel tried to prevent the boat carrying Akar from approaching the islets. The Turkish military denied these reports in a statement, showing a photo of Akar on the vessel near one of the islets with a Greek patrol boat cruising next to it.

Last week, the Greek Supreme Court denied the extradition of eight Turkish officers who were allegedly involved in the attempted coup in Turkey on July 15.

The Greek Supreme Court handed down its verdict on an extradition request for eight Turkish soldiers who fled to Greece after the failed coup in Turkey and denied their return on Thursday.

The court cited the lack of ability to get a fair trial in Turkey as justification for denying the request for the extradition of the soldiers. Turkish news channels portrayed the decision as a negative development.

The soldiers are expected to be released in Greece soon as they officially seek asylum there.

The Greek court’s decision has sparked angry reactions from the Turkish government.