Pro-Erdoğan journalist calls on assassins to take refuge in Turkey 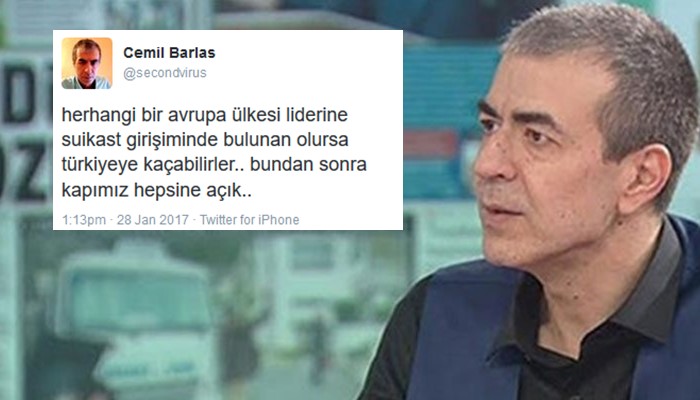 In reaction to a decision on the part of Greece not to extradite eight Turkish soldiers who sought political asylum following a failed coup attempt in Turkey on July 15, a pro-government columnist on Saturday called on assassins to take refuge in Turkey if they kill any European leaders.

“Anyone who attempts to assassinate a European leader can flee to Turkey. From now on, our doors are open to all,” said Cemir Barlas, a staunch supporter of President Recep Tayyip Erdoğan and a commentator for the pro-government A Haber TV, in a Twitter message.

The Greek Supreme Court handed down its verdict on an extradition request for eight Turkish soldiers who fled to Greece after the failed coup in Turkey and denied their return on Thursday. The court cited the lack of ability to get a fair trial in Turkey as justification for denying the request for the extradition of the soldiers.

Barlas has been at the center of reactions with his statement against basic human rights. Barlas said during a program in December that followers of the Gülen movement, which the government accuses of being behind the failed coup, must be kept in detention camps and should be given food tickets since the government has seized most of their assets.

“Almost 150,000 of them have been thrown [out of state jobs]. Now they don’t have any money. There should be a solution to this. For example, they could be given food tickets or locked up in a place [like a detention camp]. In total there will be around 500,000 of them, without a house, without money, and nobody wants to be seen with them. Their lives have been zeroed out,” he said.

Following the capture of the suspected gunman who massacred 39 people at İstanbul’s Reina nightclub, Barlas urged authorities to do whatever is necessary to the suspect’s 4-year-old son, who was with him at the time of his apprehension, to make his father talk.

Writing a series of messages on his Twitter account, Barlas said the following: “The murderer was captured with his son. That kid should be used in any possible way to make the murderer talk. There is nothing ethically wrong [with that].”