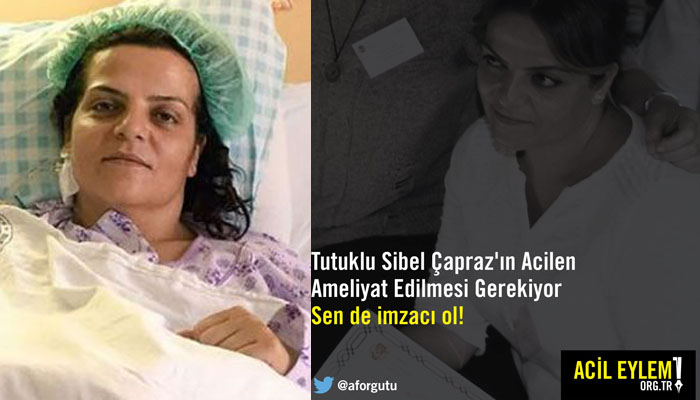 Human right advocacy group Amnesty International’s Turkey branch has initiated an urgent call for Turkish authorities to see to the health of Hakkari municipal council member from the Pro-Kurdish Democratic Regions Party (DBP) Sibel Çapraz, who was shot in Turkey’s Yüksekova district of eastern Hakkari province in November 2015 and arrested while she was under treatment in a hospital in March 2016.

Underlining that the authorities are blocking Çarpraz from receiving sufficient medical care in prison, Amnesty said that she must immediately be allowed to undergo two vital surgeries without any further delay.

“We demand that Sibel Çapraz immediately be afforded urgent surgeries to reverse a colostomy procedure and inversion in an equipped medical center and that access to other medical care be provided to her without further delay,” the statement said.

Çapraz is being held at Bakırköy Women’s Prison in İstanbul and is currently standing trial on charges of inciting the public to hatred or hostility and membership in an armed terrorist organization (Kurdish Workers’ Party/Kurdistan Communities Union, [PKK/KCK]).

According to Amnesty, Çapraz’s life is at risk as she is being denied proper medical care.

Çapraz was shot in the right arm and abdomen on the night of Nov. 27. 2015 in Yüksekova, a city in the Hakkari province of eastern Turkey, during clashes between Turkish security forces and PKK militants. The day after the shooting, she underwent surgery on her arm and an emergency colostomy procedure on her damaged intestines.

On Dec. 23, she was transferred to a hospital in İstanbul for further surgery on her arm. On March 4, 2016, police detained her in the hospital and took her to the İstanbul Courthouse, and she has remained in pre-trial detention.

The authorities, failing to respond directly to the urgent medical issue, replied saying that she is receiving all the treatment she needs. Çapraz’s lawyer told Amnesty that the treatment she receives in prison consists of rehabilitation, which does not replace the surgery she needs to undergo.