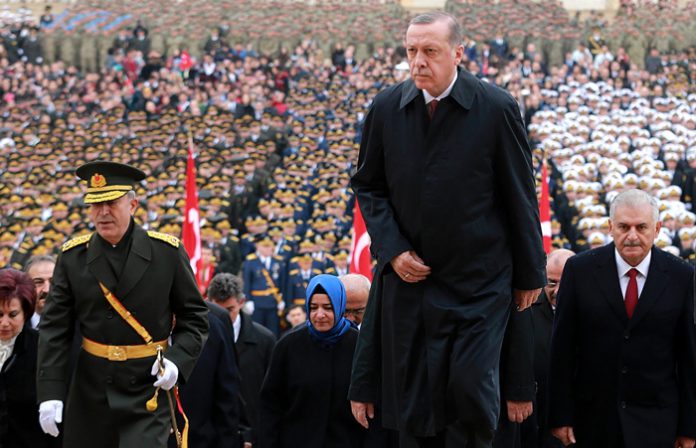 A former Turkish officer who served at NATO headquarters in Brussels but was sacked and recalled to Turkey as part of an investigation into a failed coup on July 15 claims that the putsch was clumsily executed and never intended to bring down the government, but rather served as a vehicle for President Recep Tayyip Erdoğan to eliminate opponents and the ultranationalists to take a prominent role in the military and impose their “Eurasian” agenda on the country.

In an interview published on Tuesday by Vocal Europe, the former officer shared his take on the failed coup, which due to Turkey’s familiarity with coups in the past, he said would have succeeded if it was a serious attempt. Involved with the coup were three groups, the officer said: a small band who masterminded it that included ultranationalists affiliated with Doğu Perinçek and people with ties to Erdoğan; those who thought the coup was being carried out within the chain of command and thus obeyed the orders; and military members who merely viewed the attempt, regardless of who orchestrated it, as an opportunity to rise in the ranks. The officer said that Erdoğan blamed the Gülen movement for the coup due to “animosity” for its sympathizers and also viewed it as an opportunity to cleanse the military of opponents.

Due to the lack of rule of law in Turkey and fears of unfair judicial treatment if he were to return to stand trial, the former officer has chosen to remain in Belgium, although he admits to feeling insecure due to the long reach of the Turkish government in attempting to apprehend alleged coup plotters overseas.

For the original interview in its entirety, go to http://www.vocaleurope.eu/monday-talk-with-the-purged-former-turkish-nato-officer/