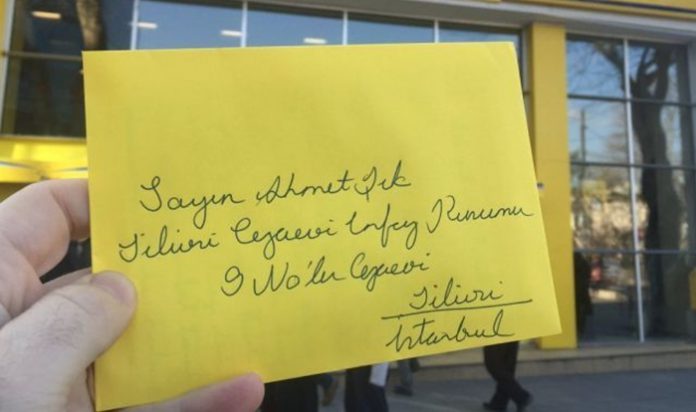 A group of journalists initiated a social media campaign on Monday to send letters to imprisoned colleagues from the Cumhuriyet daily since books are banned in Silivri Prison.

The social media campaign under the hashtag #Lettersagainstisolation in Turkish calls on citizens to send letters to journalists behind bars.

Although most of the nearly 200 jailed journalists in Turkey are being held in Silivri Prison, the campaign for the most part directed attention to Cumhuriyet editors including, but not limited to, Kadri Gürsel, Murat Sabuncu and Ahmet Şık.

Turkey’s Justice Ministry banned newspapers and books from outside except for the Quran for prisoners as of Jan. 9, according to a tweet from imprisoned Turkish-Armenian intellectual Sevan Nișanyan.

Tweets from Nişanyan, believed to have been posted by his lawyers, who recently visited him in prison, said that prison authorities have prohibited prisoners from buying daily newspapers since Jan. 1.

“Newspapers have not been allowed in the prison since New Year’s. We have to content ourselves with the TV they allow,” the first tweet said.

The following tweet said “According to the ministerial order on Jan. 9, bringing books to prisons other than the Quran is forbidden.”

Earlier, jailed former Zaman columnist and academic Ahmet Turan Alkan let people know through his son that he was not allowed to receive books in Silivri Prison.

Letters from Silivri Prison had been banned since former Zaman reporter Ayşenur Parıldak sent a letter to the Cumhuriyet daily saying that she was sexually harassed in prison.

According to the Stockholm Center for Freedom (SCF), 191 journalists are currently jailed in Turkey, 92 are wanted and 839 have been charged.