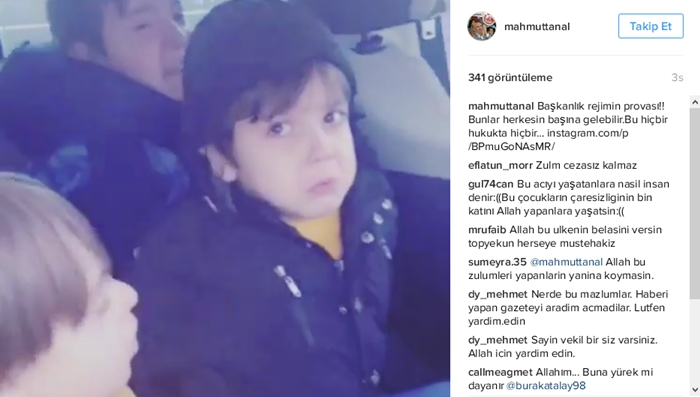 A video shared on Monday on social media shows five children left alone in tears in front of Sincan Prison in Ankara after their mother was detained while they were visiting their father in prison.

“Leaving children alone in such a situation is against the Convention on the Rights of the Child and all related laws. We will follow this issue,” said Mahmut Tanal, a deputy from the Republican People’s Party (CHP) and a member of the Human Rights Commission in the Turkish Parliament, on Monday.

“If anyone is guilty, of course they should be punished. But detaining a wife while visiting her husband in prison and as a result, leaving the children, one of them handicapped, alone is not compatible with conscience and the law or with ethics. What the video show is a humanitarian tragedy.”

In the video a child opens the door of a car in the prison parking lot, showing his brothers crying, and says in tears, “We are five brothers, left alone. We have a handicapped brother. I commend those people to God’s punishment.”

Reaction mounted after the video was shared on social media by Tanal. People say similar incidents have occurred since a witch-hunt was launched against the Gülen movement by President Recep Tayyip Erdoğan and the ruling Justice and Development Party (AKP) following a failed coup attempt on July 15.

After the story broke, journalist Mahir Zeynalov, deported from Turkey due to critical tweet in February 2014, launched a fundraising campaign under this link for the five siblings who were left in the parking lot.

Tanal brought a similar case to Parliament on Jan. 4, when a mother was detained as part of an investigation into the faith-based Gülen movement while her twins were left in an intensive care unit. “There are mothers among us. Can a baby in an intensive care unit be separated from its mother? What kind of mentality does that? Which judicial system accepts that? Which ideology embraces that?” said Tanal in his speech at the Parliament.

Meryem, whose given name only was reported in the Turkish media, gave birth to twins by C-section in a hospital in Konya two days earlier and was detained by police despite hospital reports stating that she should not travel and was taken to Aksaray from Konya in a police car.

According to reports in the Turkish media, Meryem’s brothers and father and the husbands of her sisters were also jailed over links to the Gülen movement. Other of Meryem’s family members are now collecting breast milk from her in Aksaray and bringing it to the Konya hospital to feed the twins in the intensive care unit.

A total of 1,218 people were detained, with 572 of them put under arrest, in operations targeting the Gülen movement over the past week, according to a statement from Turkey’s Interior Ministry on Monday.

A report prepared by the EU Intelligence Analysis Centre (IntCen) has revealed that although Erdoğan and the Turkish government immediately put the blame for the July 15 failed coup attempt on the faith-based Gülen movement, the coup attempt was staged by a range of Erdoğan’s opponents due to fears of an impending purge, according to a report by The Times newspaper last week.