Main opposition Republican People’s Party (CHP) deputies Şafak Pavey and Melike Basmacı and pro-Kurdish Peoples’ Democratic Party (HDP) deputy Pervin Buldan were taken to a hospital after sustaining injuries in a brawl that broke out among female lawmakers in the Turkish Parliament on Thursday.

The brawl began after independent deputy Aylin Nazlıaka handcuffed herself to the rostrum in protest of a constitutional amendment package that would give President Recep Tayyip Erdoğan executive powers. 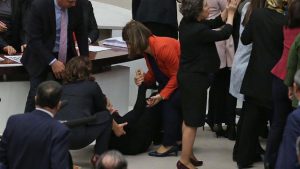 Pavey, a disabled legislator from the CHP, was pushed to the ground by a ruling Justice and Development Party (AKP) member while another colleague was “dragged by her hair,” the Hürriyet daily reported.

When deputies failed to convince Nazlıaka to end her protest, female lawmakers came to blows, shoving and slapping each other. 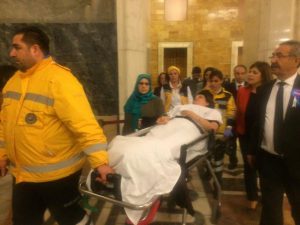 HDP Iğdır deputy and Deputy Speaker of Turkish Parliament Buldan was hospitalized after being kicked in the chest by the AKP’s Antalya deputy, Gökçen Özdoğan Enç, the HDP said in a statement on Thursday.

The AKP said Enç was also hospitalized after suffering blows to her neck and back. 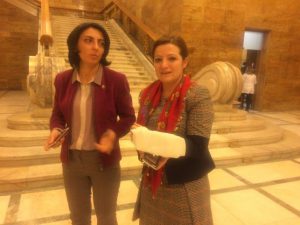 The CHP’s Basmacı was also taken to the hospital with an injured arm.

Meanwhile, Kati Piri, a Dutch parliamentarian and Turkey rapporteur for the European Parliament, wished a speedy recovery to the injured deputies in a post from her Twitter account.

“Wish my Turkish brave female colleague MPs speedy and full recovery! Violence has no place in a parliament,” she tweeted on Thursday.

It was the third time that deliberations on the proposed amendments gave way to brawls in the Turkish Parliament as the constitutional amendment package, which expands the president’s power significantly and bring an executive presidential system to the country, is highly controversial.