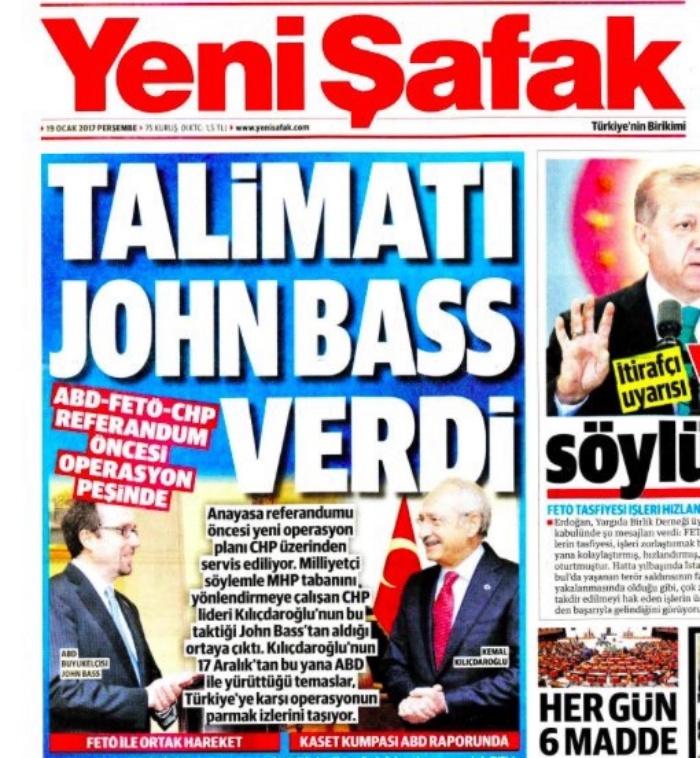 The pro-government Yeni Şafak daily has claimed that Republican People’s Party (CHP) leader Kemal Kılıçdaroğlu has received instructions from US Ambassador to Ankara John Bass to stand against a constitutional reform package seeking to introduce an executive presidency in Turkey.

The daily said in its main story on Thursday that the US, the CHP and the “FETÖ,” a derogatory term used by government circles to refer to the faith-based Gülen movement, are seeking an operation against the government before a referendum on constitutional reforms.

The ruling Justice and Development Party (AKP), backed by the Nationalist Movement Party (MHP), is pushing through legislation that President Recep Tayyip Erdoğan says will bring the strong leadership needed to prevent a return of the fragile coalition governments of the past.

The CHP and the pro-Kurdish Peoples’ Democratic Party (HDP) fear the reform will fuel authoritarianism and thus are against the reform package.

According to Yeni Şafak, CHP leader Kılıçdaroğlu also began to describe a failed coup attempt on July 15 as a “controlled coup attempt,” after a visit by Bass to CHP headquarters in Ankara.