Judges who ruled for acquittal of Dutch journalist punished, others promoted 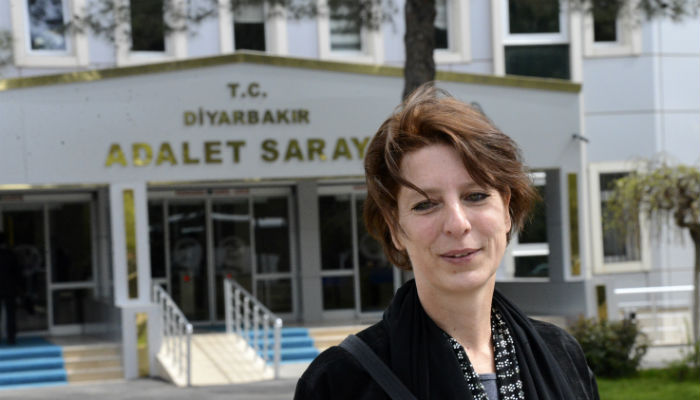 Prosecutors who launched an investigation into former Diyarbakır-based Dutch journalist Frederike Geerdink and one judge who voted against her acquittal in a trial in 2015 on charges of disseminating propaganda for a terrorist organization have been promoted, while the judge and prosecutor who supported the acquittal of the journalist have been disbarred, according to a story on the tr724 website on Friday.

Geerdink was detained for a second time in September 2015 as she covered a group of 32 activists protesting renewed violence between security forces and the PKK. She was released from custody pending trial. The provincial governor in Hakkari ordered her deportation under a law that says foreigners suspected of wrongdoing can be thrown out of the country. The journalist was subsequently deported from Turkey.

According to the article on the tr724 website, public prosecutor Şaban Özdemir, who expressed an opinion in favor of the acquittal of the Dutch journalist in her trial at the Diyarbakır court, was first appointed to a place not of his choosing and then was disbarred and jailed as part of a government crackdown launched following a failed coup attempt on July 15, 2016.

Judge Ramazan Faruk Güzel, who presided over the first hearing of Geerdink’s trial and voted in favor of the acquittal of the Dutch journalist in the final hearing, was also disbarred. His whereabouts are unknown. Güzel’s expulsion from his profession took place during the hours of Geerdink’s deportation from Turkey in September 2015.

Judge Melih Uçar, who voted against the acquittal of the Dutch journalist in the final hearing of Geerdink’s trial, was appointed to his hometown of Ankara along with his wife, who is also a judge, from Diyarbakır.