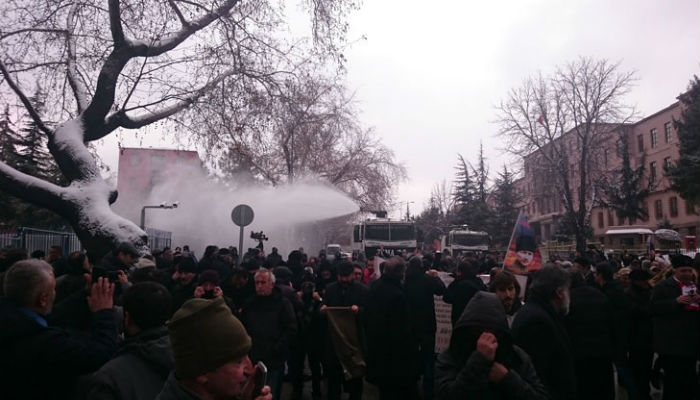 Police teams on Monday used tear gas, pressurized water and plastic bullets on a group of people from civil society organizations and bar associations who had gathered in front of Parliament to protest government plans to introduce a presidential system in Turkey.

Representatives from civil society organizations and bar associations were preparing to make a statement to the press in front of the Dikmen gate of the Turkish Parliament in Ankara when police intervened to prevent them from making the statement.

When the group tried to approach the Parliament building, police used tear gas, pressured water and plastic bullets on them.

Some deputies from the Republican People’s Party (CHP) who came to the area to extend their support to the protestors were also affected by the police intervention.

The Justice and Development Party (AKP) government is planning to introduce a presidential system in Turkey to replace the country’s current parliamentary system.

Critics say the switch to a presidential system, under which current President Recep Tayyip Erdoğan will have more executive powers, will create one-man rule in the country.

On Monday, Parliament was to begin debating a proposal seeking to introduce the executive presidency.