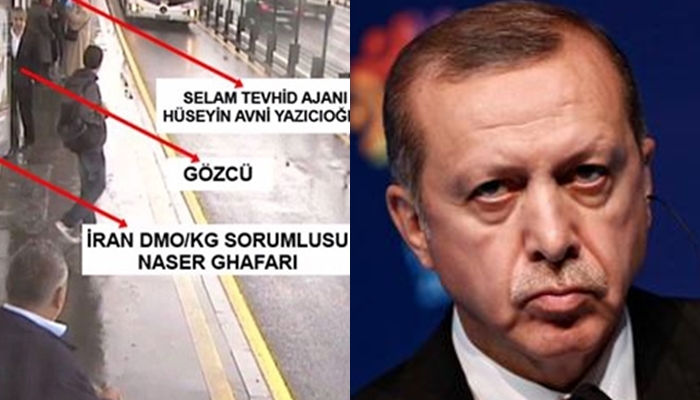 Turkey’s Constitutional Court, having already been transformed into his majesty’s court after the Islamist president orchestrated the arrest of two top judges as well as rapporteurs serving in the nation’s highest court, quietly delivered a judgment in the last week of 2016 to whitewash three convicted felons who were found guilty a long time ago on charges of membership in the Iran-backed terror group Tevhid Selam, a part of Turkish Hizbullah.

In a decision dated Dec. 8, 2016 but made public on the 26th  in the state registry, the Official Gazette, the Constitutional Court said the rights of three Hizbullah members, Yusuf Karakuş, Hasan Kılıç and Mehmet Şahin, had been violated and asked the criminal court to retry their cases. In all likelihood, they will be acquitted in the retrial given the fact President Recep Tayyip Erdoğan wants his die-hard militant followers to be exonerated in Turkey’s judiciary, which is subordinated to him. The decision is not surprising because of the pattern one increasingly sees in the Turkish judiciary in terms of the number of the high-profile Islamist terrorists who were let go despite past convictions.

Tevhid Selam was responsible for murdering prominent intellectuals and journalists in Turkey as well as foreign diplomats who had entrusted their safety to the host country in the 1990s. After a crackdown on the group, many of their members were arrested, tried and convicted in criminal courts. Some fled to Iran to seek refuge. Re-energized by the strong political cover provided by Erdoğan and his associates in the ruling Justice and Development Party (AKP) government, Hizbullah members have expanded their operations in Turkey, helping their associates get released and having convictions reversed.

Hasan Kılıç has been a leading figure in Tevhid Selam, which aims to establish an Iranian-style Islamist autocracy to replace the secular democracy in Turkey. He is a graduate of a religious school, or imam-hatip, in Tokat province, a type of school that has mushroomed in Erdoğan’s Turkey, from 71,200 in 2003 when the AKP came to power to 1.2 million as of 2016. Kılıç was detained by the police on May 6, 2000 in Istanbul after an examination of a huge cache of archives belonging to the group was found during a deadly raid on a safe house in Istanbul on Jan. 17, 2000 that resulted in the killing of Hizbullah leader Hüseyin Velioğlu in a firefight.

Kılıç spilled the beans on the group and told the police, prosecutor and judge everything he knew about the terror group and its links to Iranian intelligence. In depositions taken on May 6, 13 and 18, 2000, Kılıç revealed how he worked in the Tevhid Selam group and his connections to Iranian intelligence. He identified from photos Iranian embassy and consular diplomats as well as Savama operatives with whom he had interacted. For example, he told the prosecutor that a man code-named Sadiqi was Savama’s intelligence operative responsible for Turkey. He said he met Sadiqi several times including while he was in Tehran, revealed his real name as Seyed Syrous Habibi Hefzabad (native of Babolsar, born in 1957, diplomatic passport No:004701), who speaks fluent Turkish and who served in Turkey between 1987 and 1993 under a diplomatic cover. He also admitted sending militants to Iran for arms training.

Kılıç was sent to Ankara in connection with the murder of prominent journalist Uğur Mumcu. Two medical reports, taken in Istanbul and Ankara, showed no signs of abuse or torture. Yet he later claimed that his responses during police interrogation, his deposition in the prosecutor’s office and later his testimony in the arraignment hearing were all taken under torture. A government investigation into abuse allegations found no evidence of any ill-treatment, and the officers against whom Kılıç filed a complaint were cleared of all charges.

He was formally arrested on May 19, 2000 and indicted on July 11, 2000 on charges of attempting to change the constitutional order of Turkey by force and terror. The trial ended on Jan. 7, 2002 with a conviction that found Kılıç a “specially tasked administrator” in the armed terror group Tevhid Selam. The conviction was overturned twice, but in each retrial he was convicted on similar charges. The Ankara 11th High Criminal Court convicted him on July 28, 2005 and sentenced him to 12 years, six months in jail. His sentence was reduced to six years, three months after the Erdoğan government pushed an amnesty bill through the Turkish Parliament on July 29, 2003, six months after the AKP came to power.

The Supreme Court of Appeals upheld the conviction on March 31, 2014. The indictment listed him as a sympathizer of the 1979 Iranian Revolution; he went to Iran in 1980, was trained there, set up the Tevhid Selam network upon his return and sent militants to Iran for arms training. He was one of the five key people in the higher-ups of the organization who had interacted with Iranian intelligence and procured arms and bombs to kill diplomats, intellectuals and journalists in Turkey. Kılıç even ordered the aborted assassination of Turkish-Jewish businessman Jak Kamhi and provided two guns with silencers, hand grenades and C-4 explosives to another militant named Yusuf Karakuş.

The Justice Ministry, led by Bekir Bozdağ, an Islamist and close confidante of Erdoğan, did not challenge the allegations raised by Kılıç in his individual petition to the Constitutional Court made on July 17, 2014. The ministry said they could not locate any investigation file in the Ankara Public Prosecutor’s Office about the abuse complaint filed by Kılıç. It also said any statement taken under torture or duress would damage the protection of a fair trial. In other words, the Justice Ministry played into the hands of Kılıç, paving the way for a ruling that his rights were violated.

In the  trial and subsequent conviction of Kılıç, not only his own statements but also a large cache of evidence found in the home of the slain leader of Hizbullah as well as testimony from other suspects and witnesses were presented to the court. For example, Fatih Aydın, another suspect in the case, testified on May 12, 2000 how Kılıç sent him and many others to Iran to get arms training. Kılıç was breaking up the groups into small numbers in order to avoid attracting the attention of Turkish authorities. Archived notes found in the safe house explained how Iran profiled Kılıç as an asset and provided him with 1 billion Turkish lira to purchase a company in partnership with an Iranian national. It said Kılıç should be kept on the Iranian payroll because he might be needed when the time came.

Released from the jail in 2005 thanks to Erdoğan’s amnesty bill, Kılıç had kept a low profile for a while until he was reactivated by Iranian intelligence. The fresh investigation into the Tevhid Selam terror group, under case file no.2011/762, revealed Kılıç’s new Iranian handler to be Hamed Habibi Hefzabad, the son of Syrous Habibi Hefzabad, who had worked with Kılıç in the 1990s. Like father like son — Iranian intelligence was using a known face to reactivate old assets on Turkish soil to conduct clandestine activities and plot bombings and killings. Police wiretapped Hamed’s phone, identifying the people Iranian intelligence was using in Turkey. This new investigation, the most important espionage case that exposed Iranian intel operations in Turkey, was thwarted by Erdoğan in January 2014 because it discovered so many senior AKP officials sleeping with the enemy. To protect him and his associates, Erdoğan orchestrated the dismissal of police investigators and leading prosecutors who had probed Tevhid Selam in 2014 and later ordered the arrest of all those people who did a huge service to the nation by exposing Iran’s covert operations in Turkey.

Now the tables have turned thanks to Erdoğan, bribed with billions of dollars by Iranian operative Reza Zarrab, who used the Turkish banking system to circumvent US sanctions on Iran. The Turkish president vouched for Zarrab, helped get him released from a Turkish jail and hushed up the graft investigation as well as the espionage probe. The FBI nabbed him in Miami, however, and a US Attorney filed similar charges against him in Federal Court in New York. Since then, the Turkish president has been lobbying US officials to intervene in the Zarrab case, even sending Justice Minister Bozdağ to plead with his US counterpart to secure his release. So far, the US has balked at this.

In the meantime, however, Erdoğan’s loyal judges at the Constitutional Court and other criminal courts are busy acquitting deadly terrorists who have been proven beyond the shadow of a doubt to be serving Iranian interests. The court determined that Tevhid Selam assassinated eight people in the 1990s, including journalist Uğur Mumcu, Professor Bahriye Üçok, journalist Ahmet Taner Kışlalı and several other Kemalist/secularist intellectuals in Turkey as well as foreign diplomats such as Abdul Ghani Bedawi, a Saudi diplomat working as second secretary at the Saudi Arabian Embassy; Ehud Sadan, the Israeli Embassy’s top security officer in Ankara; and Victor Marwick, who worked for a Turkish-US logistics group.

Perhaps it would not be surprising to see a new wave of assassinations targeting prominent Turks and foreign diplomats. I guess Erdoğan is paying his dues to his Iranian masters by removing all the barriers in the way of known Iranian assets.