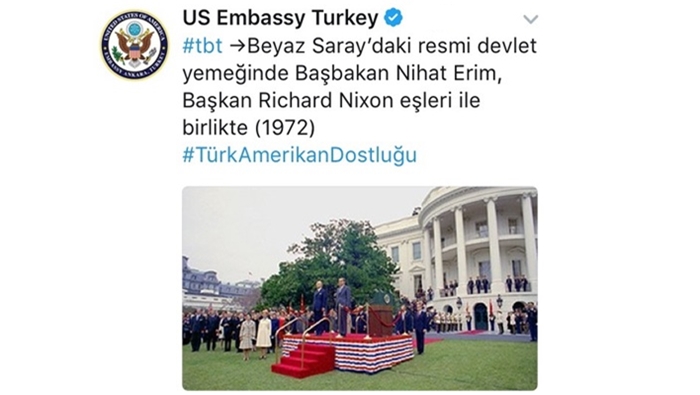 Turkish Prime Minister Binali Yıldırım has accused US Ambassador to Turkey John Bass of engaging in silly behavior for the posting of a1972 photo on the US Embassy’s Twitter account thatshows a former Turkish prime minister being received by then-US President Richard Nixon at the White House.

The photo shows then-Turkish Prime Minister Nihat Erim, who was assassinated in 1980, with US President Nixon on March 19, 1972.

The caption of the photo, which was shared on the US Embassy’s Twitter account on Thursday, says: “Prime Minister Nihat Erim and President Richard Nixon together with their wives at the official state dinner at the White House. (1972) Turkish-American Friendship.”

When asked by reporters on Friday about his comments regarding the photo, Yıldırım said: “I wonder how he thought of this, when he is getting ready to leave his post. What message he gave is important. If there is not any message behind it, then he acted in a silly way.”

It is common for Turkish government officials to use undiplomatic language towards US ambassadors in Turkey.