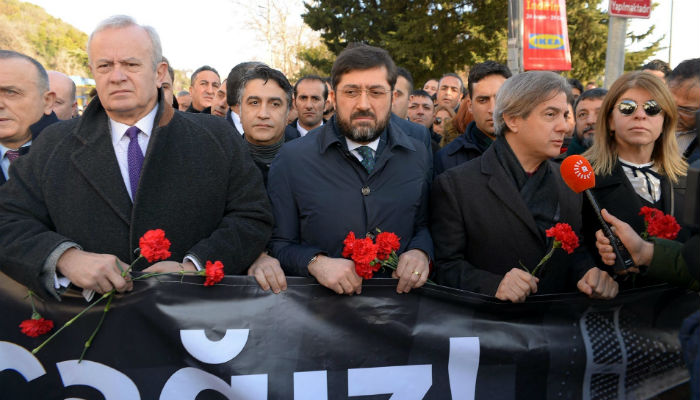 Representatives from the Turkish tourism sector on Tuesday organized a march in İstanbul to condemn terrorism and commemorate the victims of a nightclub attack in İstanbul in the early hours of New Year’s Day that claimed the lives of at least 39 people.

The march began from Kuruçeşme Cemil Topuzlu Park and ended in front of Reina, the popular nightclub that was the scene of Sunday’s attack.

The group carried a banner during the march that read: “We will not be intimidated. For our future.”

At slightly after 1 a.m. on New Year’s Day, a man wielding a Kalashnikov rifle killed a policeman and a civilian outside the entrance to the popular Reina nightclub and blazed his way into the club, randomly shooting at some of the hundreds of revelers bringing in the new year.

The terrorist Islamic State in Iraq and the Levant (ISIL) claimed responsibility for the attack, which also wounded 69 people.

“In continuation of the blessed operations that Islamic State is conducting against the protector of the cross, Turkey, a heroic soldier of the caliphate struck one of the most famous nightclubs where the Christians celebrate their apostate holiday,” the ISIL statement said as reported by Reuters on Monday.

Thirty-five victims of the massacre carried out by a lone gunman in the early hours of Sunday have been identified, with 24 of them being foreign nationals and 11 Turkish citizens.