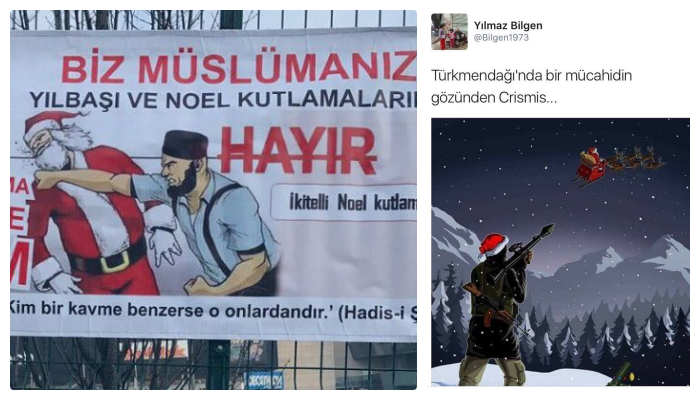 After an armed attack on a popular İstanbul nightclub during New Year’s Eve celebrations that killed at least 39 and wounded 69, a campaign against New Year’s festivities among pro-government circles is coming under heavy criticism in Turkey as the possible trigger for the terrorist attack.

Prior to the end of the year, a municipality in İstanbul hung a banner targeting Santa Claus, New Year’s celebrations; pro-government media ran stories against festivities often mixing them up with Christmas; and Turkey’s Directorate of Religious Affairs (DİB) issued a Friday sermon to be preached in all mosques in Turkey on Dec. 30 declaring such celebrations “illegitimate” since such festivities belong to “other cultures.”

After the attack perpetrated by a gunman reportedly dressed as Santa Claus, renowned author Elif Şafak condemned the massacre and the “fanatics who have been spreading hate speech against New Year celebrations” on her Twitter account.

Several Twitter users also directed attention to messages in pro-government media disseminating hatred against those who celebrate the coming of the new year.

Few days before New Year’s Eve, a banner believed to have been hung on a street in İstanbul’s İkitelli district that shows a man with a Muslim cap and beard punching Santa and suggesting Muslims not take part in Christmas and New Year’s celebrations had drawn ire among Twitter users.

A Twitter account under the pseudonym of TurkeyUntold said: “[Turkish President] Erdoğan’s policy of intolerance in one banner that has been seen in İstanbul: We are Muslims. No to Christmas & New Year’s Eve celebrations.”

Following the attack that killed at least 39 including 15 foreign nationals, the president of the DİB, Mehmet Görmez on Sunday condemned the attack, saying that there is no difference between targeting an entertainment venue or a temple and no terrorist attack is acceptable.

Twenty of the victims have been identified thus far, and police are continuing to search for the assailant.