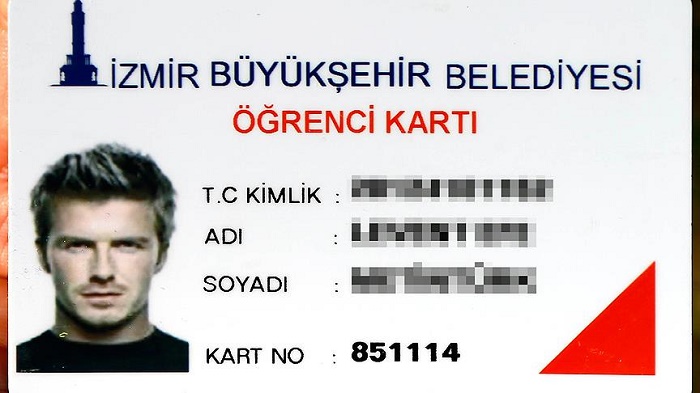 The İzmir Municipality’s public transport authority, ESHOT, has canceled at least 40 transport cards with photos of Turkish and world celebrities instead of pictures of the original card holders.

After a Twitter user shared one of his friend’s bus cards bearing the picture of retired footballer David Beckham, the authority issued a statement noting that 40 cards had been canceled for similar reasons.

“Our colleagues working in the card unit, which responds to tens of thousands of applications every day, have determined that at least 40 applications used the pictures of Brad Pitt, Adriana Lima, Angelina Jolie, Johnny Deep, Al Pacino, Tarkan, Ahmet Kaya, [Cristiano] Ronaldo, [Fernando] Muslera, Volkan Demirel and Mesut Özil. They were all canceled.”
a statement from ESHOT said.

According to the Hürriyet daily, a male student, L.E.M., attempted to upload his own photograph to the online application system for the bus card, but it was not accepted by ESHOT. L.E.M. then attempted to use Beckham’s picture, this time succeeding.