Şık was not notified of the reason for his detention according to lawyer Can Atalay, but the state-run Anadolu news agency reported that Şık was detained for “terrorist propaganda” and publicly humiliating the Republic of Turkey, its judiciary, military and police force.

According to the state news agency, Şık was detained for his interview with a terrorist Kurdistan Workers’ Party (PKK) leader, Cemil Bayık, and his columns questioning controversial National Intelligence Organization (MİT) trucks that were allegedly carrying weapons to illegal groups in Syria.

It subsequently emerged that a remark by Şık at a European Parliament event in September 2014 was included in the investigation. Şık had reportedly said that those who work for the PKK are also journalists.

Şık has been openly critical of President Recep Tayyip Erdoğan and the Justice and Development Party (AKP) as well as the Gülen movement. However, a lawyer named Fidel Okan tweeted following Şık’s detention on Thursday that Şık had earlier realized that he would be investigated over Gülen links.

Şık has been questioning the arguments of the government about a coup attempt in Turkey on July 15 as he claims that Erdoğan played a role in plotting the coup. In addition, Şık disproved claims that the murderer of the Russian ambassador to Ankara, a police officer, has links to the Gülen movement. It was Şık who first wrote that the murderer was not investigated over Gülen links, unlike thousands of others in the police force.

At the time, Şık argued that he was arrested for writing a book criticizing the Gülen movement as a result of a plot of movement sympathizers within the bureaucracy. The AKP government is conducting a massive purge against the Gülen movement after labelling it a terrorist organization especially after the failed coup of July 15. Over 100,000 people, including police officers, judges and prosecutors, have been dismissed and replaced.

Lawyer Okan mentioned on Twitter after Şık’s detention that based on the testimony of a “secret witness,” Şık could be accused of Gülen links. Allegedly, the secret witness told prosecutors that Şık wrote the book against Gülen under instructions from Fethullah Gülen.

The list of journalists was leaked hours after Turkish police teams detained dozens more journalists during simultaneous raids in İstanbul and Diyarbakır. 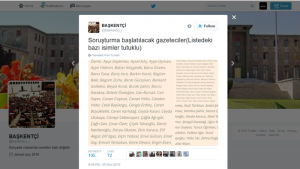