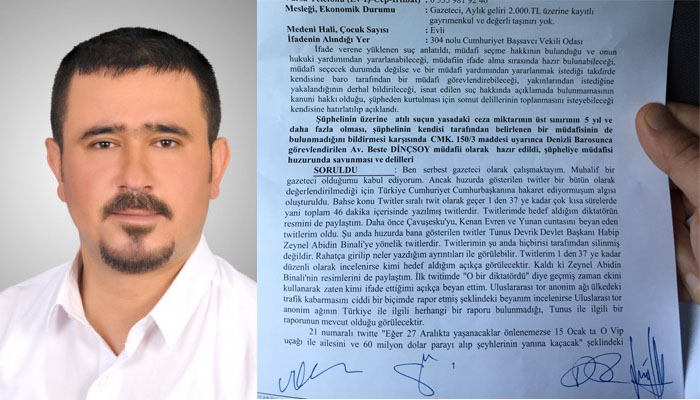 Police raided the home of freelance journalist Gökhan Özbek early on Tuesday and briefly detained him after Salih Tuna, a pro-government columnist with the Yeni Şafak daily and a staunch supporter of President Recep Tayyip Erdoğan, pointed him out as a target.

Özbek wrote in his Twitter account early Tuesday that police officers were at his door and that they were informing him about a warrant issued for his detention.

“Police officers at my door. They started the detention process. As [poet] Nazım [Hikmet Ran] says: Live, like a human being, free and fraternally,” he wrote.

Hours after his last tweet, Özbek also wrote on Twitter that he was released after interrogation at a police station. He said he was briefly detained and questioned because of his tweets criticizing Erdoğan and the government.

Tuna had targeted Özbek in his column on Monday, saying he was no different than main opposition Republican People’s Party (CHP) Chairman Kemal Kılıçdaroğlu’s advisor Fatih Gürsul, who was arrested on Dec. 22 on charges of using ByLock, a smart phone application that authorities claim is a communication tool between members of the Gülen movement.

“Who is this [Gökhan Özbek]? He has been a press advisor to the CHP’s Kemerhisar Municipality. So, from this perspective, he is no different than Kılıçdaroğlu’s Fatih Gürsul, who was arrested over links to F… [FETÖ],” Tuna wrote.

FETÖ is a derogatory term and acronym for the Fethullahist Terrorist Organization, coined by President Erdoğan and the Justice and Development Party (AKP) government to refer to the Gülen movement, which Erdoğan and the AKP accuse of masterminding a failed coup attempt on July 15.