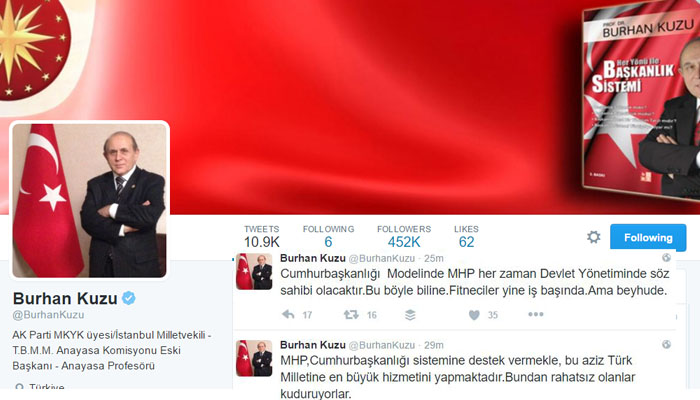 Burhan Kuzu, an advisor to President Recep Tayyip Erdoğan and a Justice and Development Party (AKP) İstanbul deputy, said on Wednesday that the opposition Nationalist Movement Party (MHP) will always have a voice in state governance since it has supported the ruling AKP on a draft constitution that aims to switch Turkey from a parliamentary to a presidential system of governance.

In series of Tweets early on Wednesday, Kuzu said: “The MHP serves the great Turkish nation by supporting the presidential system. Those who don’t like [MHP’s support for the AKP] went mad.”

He further said: “In a presidential system [in Turkey], the MHP will always have a voice in state governance. Everyone must know this. Hate-mongers are at work. But [their efforts are] pointless.”

Following MHP leader Devlet Bahçeli’s promise in November to Prime Minister Binali Yıldırım to support the AKP government when a draft constitution was submitted for parliamentary approval, the main opposition Republican People’s Party (CHP) objected, claiming the draft constitution aims to switch to a presidential system of governance in Turkey.