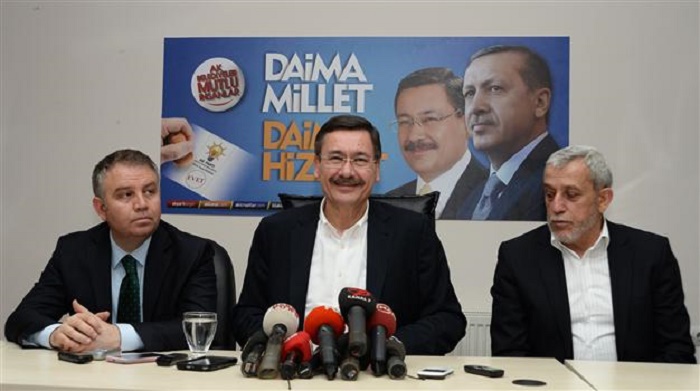 Melih Gökçek, the mayor of Turkey’s capital province of Ankara, has blamed the Gülen movement for the defeat of his son, Osman Gökçek, in the election for chairmanship of the city’s chamber of commerce.

Osman Gökçek was defeated by Gürsel Baran in an election to select the new chairman of the Ankara Chamber of Commerce (ATO) on Dec. 3.

Accusing Rifat Hisarcıklıoğlu, chairman of umbrella organization the Turkish Union of Chambers and Commodity Exchanges (TOBB) of organizing opposition against his son, the mayor said Hisarcıklıoğlu collaborated with the Gülen movement to defeat his son.

Accusing the movement of anything bad is nothing new in Turkey as state officials as well as criminals and suspects also blame the movement for crimes, negligence and sometimes wrongdoing.

The Turkish government accuses the movement or orchestrating a coup attempt on July 15, shooting down a Russian warplane in 2015 and murdering the Russian ambassador to Ankara in December of this year.

In late October President Recep Tayyip Erdoğan’s chief advisor, Yiğit Bulut, hinted at connections between FETÖ, a derogatory term coined by the government to refer to the Gülen movement as a terrorist organization, and the 9/11 terrorist attacks in the US.

In mid-October, the infamous police officer who sprayed tear gas directly into the face of a female protestor during the Gezi demonstrations, for which he received a suspended 20-month jail sentence, blamed his superior, whom he considered to be affiliated with the movement.

Earlier, Soma Holding Chairman Can Gürkan said Turkey’s worst mining accident that killed 301 people at his mine was a plot by the movement.

Sentenced to 19 years in prison for his ex-wife’s murder, Turkish mob boss Alaattin Çakıcı earlier claimed that judges and prosecutors affiliated with the movement blocked a fair trial in his case.

Late in September, a report that the Ankara Chief Public Prosecutor’s Office attached to its investigation into the movement stated that the removal of talented pilots from within the military and FETÖ’s ensuing infiltration has increased the occurrence of crashes.