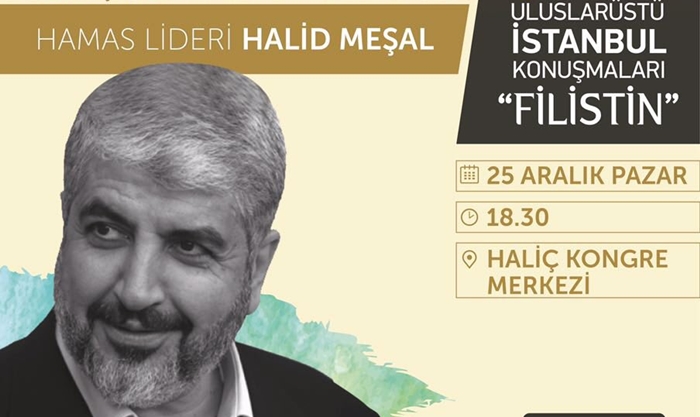 Hamas leader Khaled Mashaal will deliver a speech at a program organized by the pro-government Yedi Hilal (Seven Crescent) organization on Dec. 25 in İstanbul.

According to information shared on Yedi Hilal’s Twitter account, Mashaal will speak on Palestine as part of the “Supranational İstanbul Talks” program.

Mashaal’s talk will take place only days after Eitan Naeh, Israel’s new ambassador to Turkey, presented his credentials to Turkish President Recep Tayyip Erdoğan during a ceremony at the presidential palace in Ankara following six years of tension between the two countries.

Israel used to insist that Turkey should end the activities of Hamas, which is claimed to have offices in the country.

Foreign Minister Mevlüt Çavuşoğlu stated on June 22 that Turkey cutting its ties with Hamas cannot be set as a condition for normalizing relations with Israel, adding that Hamas is essential for a permanent peace in Israel.

Turkish President Erdogan met with Mashaal in Istanbul on June 25.

Turkey and Israel normalized relations in August after the Turkish Parliament approved a deal struck in June for Israel to pay $20 million in compensation to the families of victims on board the Mavi Marmara.