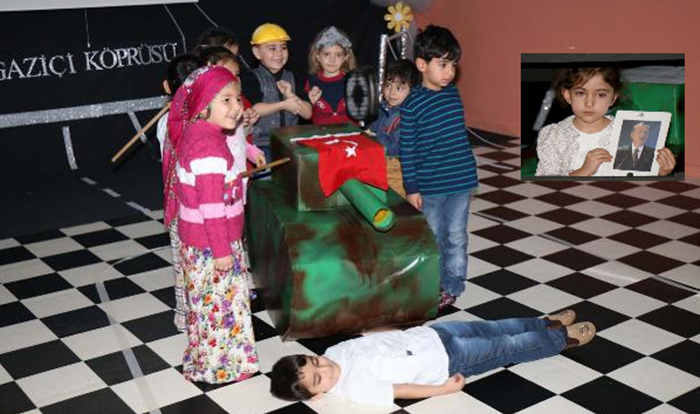 Children in a kindergarten in Turkey’s Sivas province re-enacted the events of a July 15 failed coup in Turkey for a recent event with their families, with head of the local Education Ministry branch Mustafa Altınsoy congratulating the organizers.

Aksu Kindergarten director Damla Bilici praised the resistance of the people on the night of the coup as kindergarteners were made to lie down in front of tanks in a re-enactment of the botched coup.

Altınsoy delivered a speech at the event that likened the night of July 15 to the establishment of the Republic of Turkey.

More than 120,000 people have been purged from state bodies, in excess of 90,000 detained and over 40,000 have been arrested since the coup attempt. Arrestees include journalists, judges, prosecutors, police and military officers, academics, governors and even a comedian. Critics argue that lists of Gülen sympathizers were drawn up prior to the coup attempt.