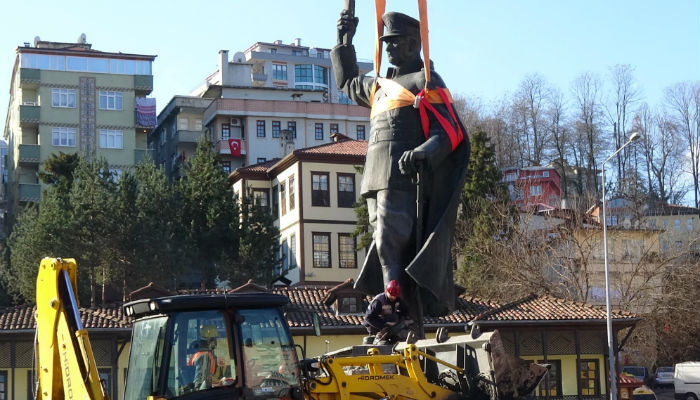 Representatives from the Atatürkist Thought Association (ADD) and main opposition Republican People’s Party (CHP) have criticized the removal of a statue of Mustafa Kemal Atatürk, the founder of modern Turkey, from a square in the Black Sea province of Rize.

Atatürk’s statue was removed on Thursday morning by the Rize Municipality as part of renovations at the July 15 Democracy and Republic Square. The names of many public venues in Turkey have been changed in memory of the victims of a failed coup attempt on July 15.

The sculpture will be re-erected in front of the Rize Governor’s Office.

ADD Chairman Ömer Toprak criticized the removal of the Atatürk statue from the square.

“Today is a black day for Rize. … They are trying to erase Atatürk from the memory of Rize,” he said.

Toprak also said Atatürk’s statue will be replaced by a monument in memory of July 15 victims.

CHP Rize provincial official Saltuk Deniz also slammed the decision to remove the sculpture from the square in the city center.

Both Toprak and Saltuk quarreled with municipal officials during the removal of the statue.