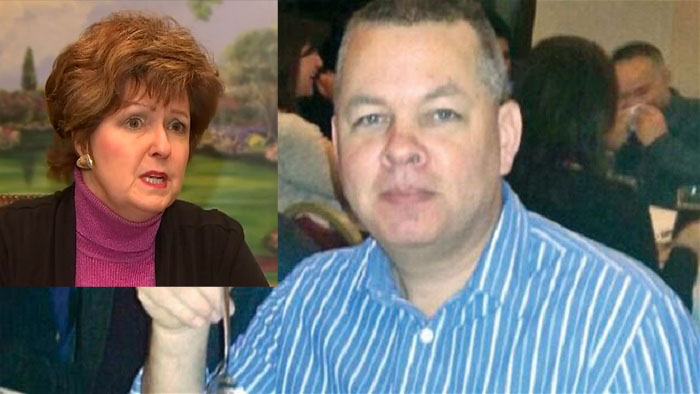 Andrew Craig Brunson, an American pastor of a Protestant church in İzmir who was arrested on Dec. 9 on charges of links to a failed coup on July 15, is being kept in a jail in Turkey with Islamic State in Iraq and the Levant (ISIL) militants, a member of his church in the US said.

Speaking with Channel 2 during an interview on Tuesday, Catherine Sykes, a member Dunwoody’s Life Center ministries, said Brunson’s life is in grave danger and as he is being kept with ISIL fighters.

Sykes, who traveled to Turkey last month, said: “He is in a Turkish prison with ISIS [also know as ISIL] fighters, Afghani rebels and others who have created problems for the Turkish government.

“Hopefully, we can get the flood of response to bring him home, and our president will act, our state department will use all pressure that it can,” Sykes added.

On Dec. 9, a court in İzmir ruled for the arrest of American pastor Brunson, a 23-year resident of Turkey, on charges of links to the Gülen movement, which is accused by the government of masterminding the failed coup on July 15.

Forty-eight year-old Brunson and his wife Norine were detained in İzmir on Oct. 7 under Interior Ministry deportation orders. Although his wife was released on Oct. 19 and given permission to remain in Turkey, Rev. Brunson had been held at a detention center in Izmir.

The court ruled for the arrest of the American cleric on charges of “posing a threat to national security.” Brunson had survived an attack in 2011 while in the garden of a church in İzmir.