The Hürriyet daily’s Ankara representative, Deniz Zeyrek, was replaced on Wednesday by the Ankara bureau chief of CNN Türk, Hande Fırat, who aired a FaceTime message from President Recep Tayyip Erdoğan on the evening of a coup attempt in July, amid debates over the assassination on Monday of Russian Ambassador to Turkey Andrei Karlov.

Zeyrek, who had been serving as the Ankara representative since late 2013, claimed on Tuesday that Turkish officials believe the assassin of the Russian ambassador, who was shot dead on Monday night, might have been motivated by radical feelings after watching killings in Aleppo by the Russian-backed Assad regime, or that countries such as Iran and the US might have been behind it since they are not pleased with an ongoing rapprochement between Turkey and Russia.

The Justice and Development Party (AKP) government in the first hours after the assassination put the blame on the Gülen movement, despite the fact that Russia stated on Wednesday that it is too early to name the guilty party. 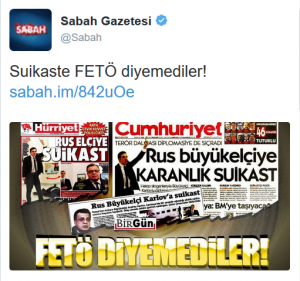 The Sabah daily, which was run by Serhat Albayrak, the brother of Erdoğan’s son-in-law and Energy Minister Berat Albayrak, on Tuesday targeted Hurriyet for not identifying the murderer of the Russian ambassador as a Gülen movement member.

Yalçındağ stepped down from his post after leaked emails belonging to Berat Albayrak, Turkey’s energy minister and the son-in-law of President Recep Tayyip Erdoğan, showed he was acting as the government and Erdoğan’s “man” within the Doğan Media Group.

In emails that were allegedly sent by Yalçındağ to Albayrak, Yalçındağ gives Albayrak a daily briefing on the media group’s activities and how they cover certain developments in favor of the government.

In an email dated April 21, 2016, Yalçındağ says: “Deniz Zeyrek is an enemy [of the government]. I tried my best. I decreased [his number of appearances] on TV programs on CNNTürk from five to two a week.” In the same email Yalçındağ asks for Minister Albayrak’s help in removing Zeyrek from his position.

Sedat Ergin, editor-in-chief of the Hürriyet daily, said Zeyrek would continue to contribute to the paper as a columnist, the Hürriyet Daily News reported.

Fırat had been serving as CNNTürk’s Ankara bureau chief since 2010.

On the evening of July 15 President Erdoğan connected to one of the most highly watched news stations in the country, CNNTürk, via FaceTime on the show of host and journalist Fırat.

Thanks to this FaceTime call, Erdoğan was able to mobilize the people against the putschists on the night of the attempt.

Fırat had stated that Erdoğan’s call was spontaneous. However, later on, during a ceremony on Nov. 13 in which Fırat received an award for this particular story, the owner of CNNTürk and the Doğan Media Group, Aydın Doğan, said Fırat told him about the possibility of a connection with the president on the night of the coup. In response, Doğan told Fırat that if she could manage it on live TV, he would reward her journalistic success by paying her wedding reception costs and would buy her an apartment.