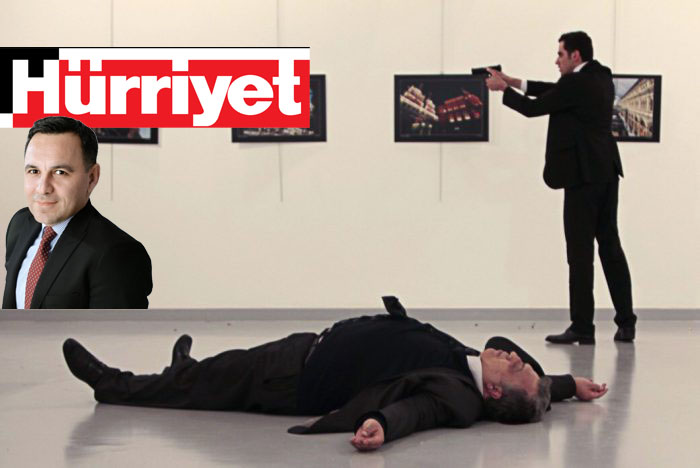 The Hürriyet daily’s Ankara representative, Deniz Zeyrek, claimed on Tuesday that Turkish officials believe the assassin of the Russian ambassador, who was shot dead on Monday night, might have been motivated by radical feelings after watching killings in Aleppo by the Russian-backed Assad regime, or that countries such as Iran and the US might have been behind it since they are not pleased with an ongoing rapprochement between Turkey and Russia.

In a special report from Ankara for Hürriyet on Tuesday, Zeyrek said the assassination of the Russian Ambassador to Turkey Andrei Karlov by a Turkish police officer while giving a speech in an art gallery on Monday was a well-planned and well-timed act.

According to Zeyrek, finding the motive behind the killing of the Russian ambassador is difficult as the assassin was subsequently killed by security forces.

Zeyrek, however, underlined that there are two strong possibilities that might have motivated the police officer to kill Karlov.

“The first possibility is that he might have been overcome with Islamist feelings after watching news about the killings in Syria’s Aleppo by the Russian-backed Assad regime. However, because the assassination was a very well-planned and well-timed one, there might have been some ’employer’ behind it. A Turkish official drew attention to the fact that normalization of Turkish-Russian relations was not liked by Iran or the West [especially the US]. He said: ‘If we are looking for a probable suspect, we must look at those who don’t want Turkish-Russian rapprochement’,” Zeyrek said.

A police officer, Mevlüt Mert Altıntaş, born in 1994 in Turkey’s western province of Aydın, gunned down Karlov as he gave a speech at an Ankara art gallery on Monday.

Immediately after the news of Karlov’s assassination spread in the media, the pro-government media was quick to put the blame on the Gülen movement, which the government also blames for a failed coup attempt on July 15.

Cem Küçük, a notorious harasser who constantly targets critics of President Recep Tayyip Erdoğan, wrote on Twitter that the terrorist was a Gülen movement follower. Targeting sympathizers of the peaceful movement who live abroad, Küçük urged the state to kill them all. Speaking on behalf of Russia as well, Küçük argued that the Gülen movement is now a common target for both Russia and Turkey.

Meanwhile, US President-elect Donald Trump on Monday said the killing was carried out by a “radical Islamic terrorist” and violated “all rules of civilized order.”

Russian President Vladimir Putin also said on Monday that the assassination of his ambassador was “without doubt a provocation aimed at spoiling the normalization of Russo-Turkish relations and spoiling the Syrian peace process.”