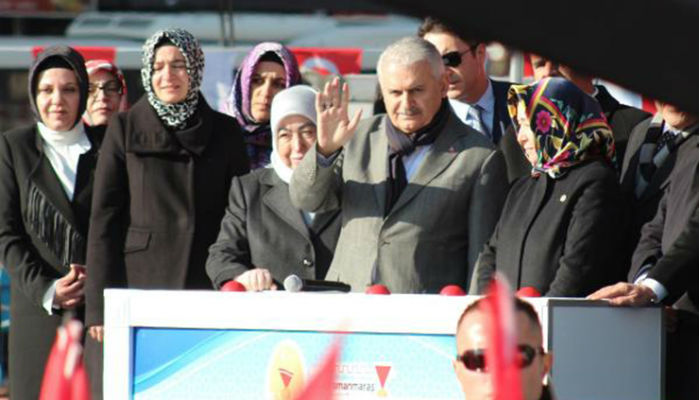 In the wake of a terrorist attack that claimed the lives of 13 soldiers in the central province of Kayseri on Saturday, Turkey’s Prime Minister Binali Yıldırım has said the aim of the terror attacks is to prevent the launch of high-speed trains and the building of highways and modern airports in the country.

Yıldırım, who was speaking at a groundbreaking ceremony in the southern province of Kahramanmaraş several hours after the Kayseri attack, said: “These attacks may delay our becoming connected with the high-speed train, but they cannot prevent us from doing so. They may delay [construction of] modern airports, but they can’t prevent this. They cannot prevent us from building highways.”

The explosion in Kayseri occurred just as a public bus carrying off-duty soldiers and civilians drove past a car carrying explosives. The bomb exploded at an entrance gate to Erciyes University. Some 56 people were injured in the attack.

Turkey was also shaken by twin bomb blasts in İstanbul last Saturday, which claimed the lives of 44 people and injured 166 others.

The Kurdistan Freedom Hawks (TAK), an offshoot of the terrorist Kurdistan Workers’ Party (PKK), on Sunday claimed responsibility for the twin bombings in İstanbul.