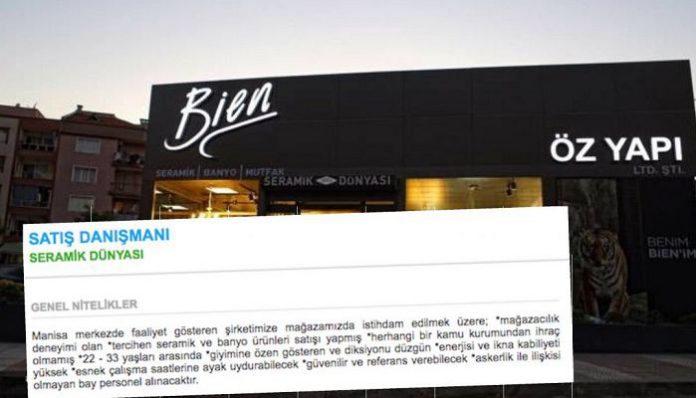 Discrimination in post-coup Turkey has reached a new level with companies discriminating against people who have lost their jobs in investigations targeting the government’s perceived enemies.

Seramik Dünyası, a building materials seller in the Aegean province of Manisa, posted a job offer for a salesperson position at its office downtown.

“Not having been dismissed from any state institutions” was among the qualifications for potential applicants.

It is not the first time that local business owners have joined the government in its discriminatory approach against certain target groups. “People affiliated with the Fethullahist Terrorist Organization [a derogatory term coined by the government] are not allowed to shop here,” said a banner hung by a Konya vendor on his sales booth in late August.

A Denizli restaurant hung another banner on its walls saying, “Traitors, putschists and paralells not are allowed in the aftermath of the July 15 coup attempt.”

The Turkish government accuses the Gülen movement of masterminding a July 15 coup attempt while the latter denies any involvement.

In what many call a planned purge, the government purged 120,000 people, detained 80,000 and arrested 40,000 over their alleged or real ties to the movement.

Some 11,000 teachers were also suspended over their alleged links to the outlawed Kurdistan Workers’ Party (PKK). (Turkey Purge)