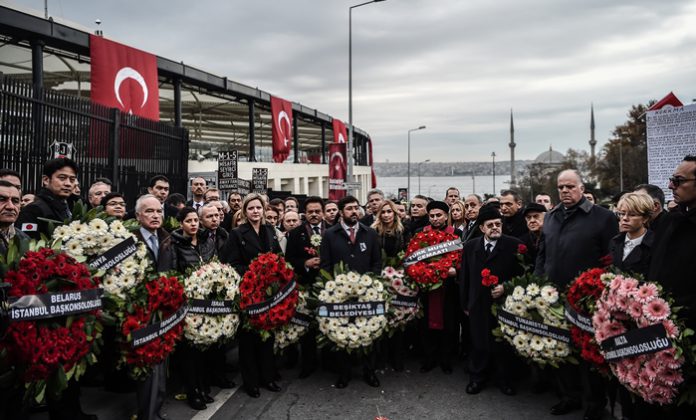 The combination of both the deliberately ratcheted-up, vitriolic anti-Western diatribe by Turkey’s Islamist rulers and a surge in xenophobic incidents on the ground suggests that the storming of a foreign embassy in Ankara or consulate compound in Istanbul by thugs to send a chilling message to allies and feed the public paranoia is quite likely.

By now it has become clear that Turkey’s autocratic President Recep Tayyip Erdoğan is following a playbook borrowed from the experience of the Iranian mullah in consolidating a power grab. From arming and funding radical groups in Turkey and its neighborhood to plotting false flags to set up groups for persecution and oppression, Erdoğan and his associates (some are known to be pro-Iranian Islamist zealots, anyway) have been practicing a bad imitation of the Iranian act of playing dirty.

The ugly protest against some 30 diplomats who paid their respects to terror victims by visiting the scene of twin bomb blasts in Istanbul that killed 44 on Saturday night is just a peek into that dark side of Erdoğan’s clandestine business. As several men in the group called the foreign diplomats killers and one actually smashed the funeral wreath laid by the consul general of the Netherlands, the footage was carried to the masses by Erdoğan’s nationwide media machine. As this was happening, just a few miles away Erdoğan was delivering yet another venomous speech against the West, telling riot police during his visit to their district garrison in Bayrampaşa how the terrorist acts were staged by Western imperialists who do not want Turkey to ascend to the position of a great power once occupied by the Ottomans. These remarks were also televised for a national audience.

Foreign embassies in Ankara and consular buildings in Istanbul have so far faced two types of protests that were traced to Erdoğan and his company of Islamist thugs. One was organized by radical groups aligned with the government, supported and steered by the intelligence agency, MİT, an organization that was transformed into the president’s own militant network to target critics and opponents, whoever they may be. The goal is intimidation. The other is seemingly peaceful protests that were openly organized by Erdoğan’s ruling Justice and Development Party (AKP) with the mobilization of youth and women’s branches across Turkey. The main motivation for this is to score public relations points and fan the xenophobic euphoria.

The former, a sort of black-op by Turkish intelligence, has been played out time and again since 2011 when Erdoğan consolidated his electoral support base in the elections with a landslide 50 percent of the vote. Mostly al-Qaeda affiliated groups were used in protests and demonstrations staged before embassy and consulate buildings in both Ankara and Istanbul. These militant networks, tapped as leverage by Erdoğan to interfere in Syrian, Libyan and other countries’ affairs, found a perfect political cover to mushroom in Turkey and paid their dues by intimidating and terrorizing Erdoğan’s enemies.

One such al-Qaeda group set up its base in Ankara’s Keçiören district, a short distance by car from National Intelligence Organization (MİT) headquarters in Yenimahalle. The group has been active for years allegedly via front charity organizations called Merhamet-Der and Medarik in Ankara and Garip-Der in Istanbul. These associations were also used as platforms to raise funds, recruit militants, run jihadist traffic and support their families that were left behind. The group had been monitored for some time by police and prosecutors before Erdoğan purged and arrested all those investigators who kept track of radical groups including ones clandestinely supported by MİT. There was even a formal prosecution launched in 2011, but it was thwarted by Erdoğan.

The cell ringleader in Ankara is a Turkish national named Umut Ömer Belül, who touts himself as an Islamist activist but is in fact listed as an al-Qaeda suspect in the botched investigation. He has helped run the pro-al-Qaeda Turkish magazine İslam Dünyası (Islamic World) since 2011. He organized protest rallies in front of the French Embassy in Ankara when France launched a military intervention in Mali in January 2013 to stop the advance of jihadist groups. The rally condemned France and supported radical militants in the African country. On his Facebook page Belül declared his support for jihadists in Mali and posted a picture of Al-Qaeda leader Ayman al-Zawahiri.

It was also Belül who organized a rally at the US Embassy on Dec. 23, 2012, when the US listed the Nusra Front in Syria as a terrorist organization. Erdoğan and his government were arming and funding Jabhat ul-Nusra, among other radical groups, to topple the Bashar al-Assad government. He led another rally in front of the US Embassy in Ankara on Sept. 16, 2012. When the Turkish government found it convenient to send a covert message to Russia, he was the man the government tapped to lead the protest. He has a long record. Before the Syrian crisis erupted in 2011 Belül was helping Turkish jihadists who made the trip to Afghanistan.

Belül was detained on Feb. 26, 2013 in a police operation in Ankara at the order of the Adana prosecutor. Later he was arrested by the court. During a raid on his home, police found videotapes made on behalf of a Turkish Al-Qaeda group in Syria for a recruitment drive. In Belül’s case file, there was overwhelming evidence that was collected by the police through physical and technical surveillance. Among the evidence was the connection of Belül to jihadist groups in Syria and how he raised money for them and ran the propaganda machinery. For example, police surveillance on Dec. 17, 2012 in Ankara’s bus terminal showed Belül greeting a Libyan national who came from the Syrian border.

The prosecutor who had discovered Belül’s jihadist network and filed criminal charges against him is Özcan Şişman, a veteran prosecutor who specialized in radical terror groups in Turkey and worked on hard cases for decades. He was in fact among five prosecutors who had investigated illegal arms shipments to radical groups in Syria in the case of intercepted trucks loaded with arms and cash in January 2014. Erdoğan personally intervened, secured the release of the arms and reassigned Şişman, who was later purged and arrested in a plot orchestrated by Erdoğan and his associates. Now a top Al-Qaeda suspect remains at large and is roaming freely while a veteran prosecutor who investigated radicals for decades is behind bars.

In addition to these black-op protest rallies in front of embassies, Erdoğan has recently mobilized the ruling AKP grass roots to stage demonstrations. Last month the party’s youth and women’s branches protested at the embassies of Germany, Belgium, France, Austria and Luxembourg in Ankara. These countries were specifically targeted by Erdoğan in public speeches in the days leading up to the protests. Pro-government associations and unions also lent their support to the protests. Ankara Mayor Melih Gökçek, a close ally of Erdoğan, not only provided logistical support to the protests but also sent his own thugs to the rallies. Similar protests were also held in these countries by Erdoğan’s parallel networks operating in Europe with the generous backing of the Turkish government. Alarmed by these developments, some Western diplomats decided to send their family members home, while all have taken further security measures.

Apart from the protests, most Western embassies fear terror attacks specifically targeting diplomats or key interests in Turkey. They have already reviewed security protocols and advised staff members to be vigilant and avoid public places. Terrorism has already hit areas close to diplomatic missions in the capital that are supposed to the most secure and safest places in the country. Although some were attributed to the Islamic State in Iraq and the Levant (ISIL) by the government, ISIL has never claimed credit for these attacks. For all we know, these could be false flags by Erdoğan’s notorious intelligence agency MİT given the leaks in March 2014 that revealed how Erdoğan’s thugs debated creating a pretext to intervene in Syria by having some jihadists fire mortars across the border into Turkish towns.

Against this background, it is quite understandable why Western intelligence agencies have become more reluctant to share their intel on possible terror acts with their Turkish counterpart. Turkish authorities were furious when the German Embassy issued an alert on impending attacks against its interests, shutting down diplomatic missions and German schools in Turkey in March. The attack came a few days later even though a Turkish official downplayed the alert and accused Germany of creating a crisis of confidence for Turkey. Why should Germany trust Turkey when most Syrian suspects in the case of 12 slain German nationals in an attack blamed on ISIL on Jan. 12 on the historic peninsula of Istanbul were released by Erdoğan’s judges.

The environment in which foreign diplomats have to operate in Turkey is already quite uncomfortable. Their staff members have been under surveillance around the clock and family members were targeted. Turkish citizens are discouraged from meeting with embassy contacts to discuss various issues. Even long-time contacts of foreign embassies in academia, media and civil society have started to shy away from attending such meetings for fear of being labeled traitors or even spies.

As a result, with a track record like this, having Erdoğan send his thugs to storm an embassy for a sensational provocation would not be surprising at all. This would rather be seen by many in Turkey as a bold move on the part of Erdoğan in sending a message to his perceived enemies whom he is already accusing of hostile and terrorizing behavior against the Turkish nation. According to remarks by President Erdoğan and other Turkish officials, these diplomats were already evildoers when they decided to show up at journalists’ trials to support press freedoms or attend a pro-Kurdish party parliamentary group meeting after the jailing of Kurdish lawmakers.

Perhaps a frustrated Erdoğan, isolated regionally and internationally, believes his hawkish messages are not getting through to the West despite his public bashing and bullying of the EU and the US. He may be desperate to try a new act, such as briefly storming the building of a foreign diplomatic mission before ordering a halt to pretend he is the savior of the day, or even going to extremes by marching his armed militias and thugs for an embassy takeover with violent clashes. This would be another turning point in Turkey’s relations with the West, one that could help Erdoğan break the emotional tie much of the Turkish population feels for the Western alliance.