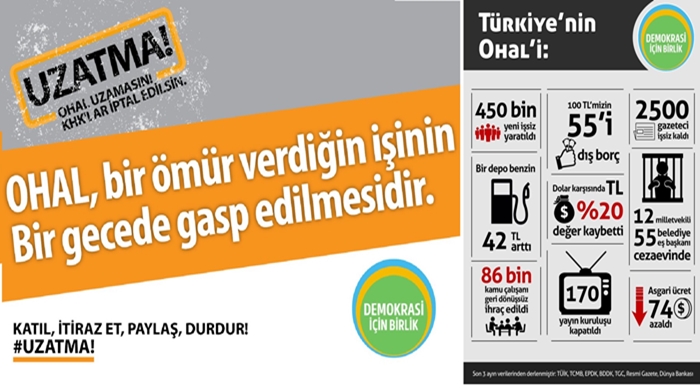 The Unity for Democracy initiative launched a campaign on social media on Thursday night, calling on the government not to extend a state of emergency (OHAL) that was declared on July 20, five days after a failed coup attempt on July 15.

“We need democracy in order to live together in peace and keep our hopes for the future alive. We need democracy for a peaceful and secure life without any concern about tomorrow. We call on all to participate in this campaign by saying “Don’t extend OHAL”, ” said a statement released by the initiative.

“We need democracy, not OHAL. An amendment to the constitution that shapes the future of the country and the life of its citizens cannot be done under circumstances where press freedom, freedom of expression and freedom of assembly have ended. OHAL circumstances cannot be used to drag the country into a one-man regime,” added in the statement, which also underlined grave human right violations and sufferings that have emerged under the OHAL regime.

On Oct. 11, the Turkish Parliament approved a motion proposed by the Prime Ministry to extend the state of emergency for three months.

The Turkish government decided to declare a state of emergency under the pretext of fighting against terrorism. However, emergency rule has enabled violations of human rights due to restrictions on certain civil liberties.

The European Union, the European Council and international rights organizations have been calling on the Turkish government to end emergency rule.

“What is it to you if Parliament and the government extend the state of emergency?” President Recep Tayyip Erdoğan said on Nov. 26 in İstanbul while slamming the European Union.