Turkish President Recep Tayyip Erdoğan is in 56th place in Forbes magazine’s annual list of the world’s most powerful people, while the Russian president has taken the number one spot for the third consecutive year.

In the list US President-elect Donald Trump is in second place, while German Chancellor Angela Merkel remains the most powerful woman, at number three. The British prime minister, Theresa May, is a new addition to the list at number 13, replacing her predecessor David Cameron, who was ranked eighth last year, while outgoing US President Barack Obama drops to 48.

Forbes says its “Most Powerful People” list “identifies one person out of every 100 million whose actions mean the most” and represents the magazine’s “best guess about who will matter in the year to come.” 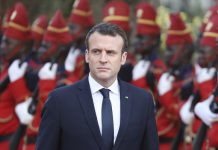 ‘We can not have Turkey’s laws on France’s ground,’ says Macron: report

German MEP barred by security from observing trial in Turkey

Turkey deports extremist who fought in Syria back home to Germany