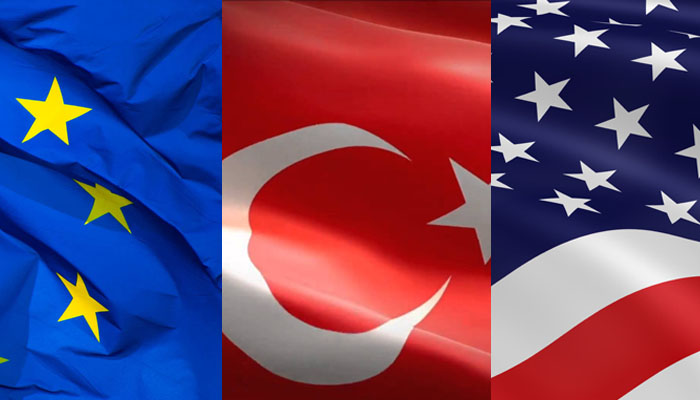 There is a growing realization both in the US and Europe that a common bond of shared values and interests no longer exists with Turkey, whose governance is considered to be “increasingly erratic, uncooperative and incapable,” an expert on Turkish political affairs has said.

In an op-ed for the Washington-based The Hill on Tuesday, Robert Ellis, a regular commentator on Turkish affairs in the Danish and international press, said Turkey, which was once making remarkable advances in reforms and an inspirational example of a secular and democratic country, is turning into an authoritarian regime under the one-man rule of its President Recep Tayyip Erdoğan, who is able to exploit dependencies of the Western world, such as refugees against the the European Union and İncirlik Airbase against the US, to its advantage while silencing dissent at home by wide-scale purges following a failed military coup on July 15.

However, Ellis claimed that the latest developments in the region around Turkey may turn the table against Erdoğan’s Turkey as his government’s “disproportionate repressive measures” taken in Turkey since the failed coup against dissent have caused international outcry.

What follows is the full text of Robert Ellis’ commentary, titled “A new Turkey policy needed” published in The Hill on Tuesday.

The report by a Washington think tank, the Bipartisan Policy Center (BPC), “Beyond the Myth of Partnership: Rethinking U.S. Policy Toward Turkey,” confirms that both the U.S. and Europe share a common disillusion about developments in Turkey.

Things were different a decade ago. A year after Turkey started accession talks with the EU in 2005, Turkey and the U.S. agreed that Turkey’s EU accession was a strategic priority for both countries. Secretary of State Condoleezza Rice later endorsed this vision, when she declared that Turkey’s AKP (Justice and Development Party) government was “dedicated to pulling Turkey west toward Europe.”

In 2010 EU Commissioner for Enlargement Stefan Füle claimed “Turkey has been making remarkable advances in reforms,” and two years later a gaggle of EU foreign ministers found Turkey to be “an inspirational example of a secular and democratic country.” Something has clearly gone wrong in the meantime, but perhaps it could be that Western leaders’ perception of the state of affairs in Turkey has been, as the chairperson Faruk Loğoğlu of the Turkish opposition party CHP (Republican People’s Party) pointed out, “sadly out of focus.”

After the brutal suppression of the Gezi Park protests in 2013, the penny started to drop. As Sedat Ergin, editor-in-chief of Turkish daily Hürriyet explained, Turkey’s Western friends turned a blind eye to Erdoğan’s illiberal mindset that emerged in 2008. “There was a scenario that they had bought and they did not want to listen to anything that would refute that scenario.”

The first purge of the military and secular opponents of the regime that began with a series of show trials in 2008 was followed three years later by a purge of the liberals in the AKP. After government ministers, businessmen and Erdoğan’s own son were accused of corruption in December 2013, a crackdown on Gülenists began, culminating in the wholesale purge that has taken place since the failed coup in July.

This has caused an international outcry, which both the U.S. and the EU have tried to ignore, as they are caught on the horns of a twin dilemma: for the U.S., to combat ISIL and for the EU, to stop the mass influx of refugees from Turkey. In both cases, Turkey has been able to exploit this dependency to its advantage. As the BPC has correctly noted, “For Ankara, the driving interest, in both foreign and domestic policy, is regime consolidation.”

The first major setback the AKP government has noted in its drive towards constitutional change, which will make Erdoğan an all-powerful executive president, was the election result in June last year, when the Kurdish HDP (Peoples’ Democratic Party) not only succeeded in overcoming the 10 percent election threshold but also gained 80 out of the Turkish parliament’s 550 seats. Consequently, Erdoğan turned his back on the 10-point peace plan agreed between the government and the HDP in February that year and reignited the 30-year conflict with the PKK (Kurdistan Workers’ Party). One by-product is Saturday’s double bomb attack in Istanbul.

According to a senior U.S. military official ISIL was the hook, but İncirlik airbase in southern Turkey was the bait, which the U.S. swallowed to cut down flying time on its sorties against ISIL from three hours to 15 minutes. On July 23 Barack Obama and Erdoğan finalized the deal and the next day Turkey launched three air strikes against ISIL and the first of 300 attacks against the PKK.

Turkey’s cross-border operation against ISIL in Syria on August 24 this year was well-timed, as it coincided with Vice President Biden’s visit to Ankara to express U.S. solidarity with Turkey after the attempted coup. Biden also expressed strong support for the operation and warned the Kurdish YPG (People’s Protection Units) to withdraw to the other side of the Euphrates, which after all was the point of operation Euphrates Shield.

The EU has similarly been sandbagged in its desperation to stem the influx of refugees to Europe, after German chancellor Angela Merkel in a Mother Teresa moment last year opened Germany’s borders to a million refugees. In March (then) Prime Minister Davutoğlu pressed Merkel to accept a deal which included six billion euros in aid and visa liberalisation for 80 million Turks.

However, the deal may well come unstuck, as an overwhelming majority in the European Parliament has called on the EU Commission and member states to initiate a temporary freeze of the ongoing accession negotiations because of “the disproportionate repressive measures” taken in Turkey since the failed coup.

There is a growing realization both in the U.S. and Europe that there is no longer a common bond of shared values and interests with Turkey, which raises the question of what kind of strategy we should adopt instead towards a partner that the BPC considers “increasingly erratic, uncooperative and incapable.”