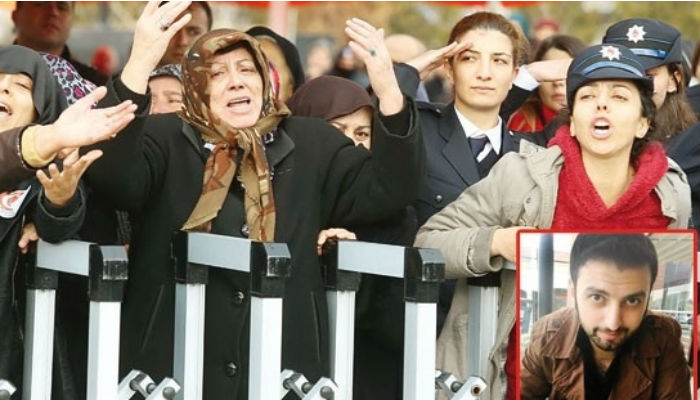 The wife and mother of a police officer who was among the victims of twin bomb attacks in İstanbul on Saturday evening have rejected condolences from members of the Justice and Development Party (AKP), apparently because they accuse them of failing to take the necessary measures to prevent acts of terrorism.

The Kurdistan Freedom Hawks (TAK), an offshoot of the terrorist Kurdistan Workers’ Party (PKK), on Sunday claimed responsibility for twin bomb attacks that took place outside a football stadium in İstanbul’s Beşiktaş district, claiming the lives of 44 people and injuring more than 160 others.

On Tuesday a funeral ceremony was held for slain police officer Tugay Can Kızılırmak in Ankara, which was attended by opposition leaders as well as many government ministers and Chief of General Staff Gen. Hulusi Akar.

“Do I have to give my son as a martyr? Why am I giving away my heart?” asked the mother, who was devastated by the loss of his son at age 26.

Kızılırmak was married two months ago and would soon move to Ankara from İstanbul to be reunited with his wife, according to Turkish media reports.

In the wake of the death of many security officials and civilians in terror attacks, Turkish government officials often make speeches in which they talk about the importance and value of martyrdom.

Eaerlier this week Turkey’s Environment Minister Mehmet Özhaseki, who visited a police station in the central province of Kayseri in the aftermath of the İstanbul bombings, told the police officers there: “We are all potential martyrs. God willing, I want to be a martyr and I hope you all will be martyrs, too.”

Özhaseki attracted widespread criticism due to his remarks, with many accusing him of trying to cover up government negligence by lauding martyrdom.