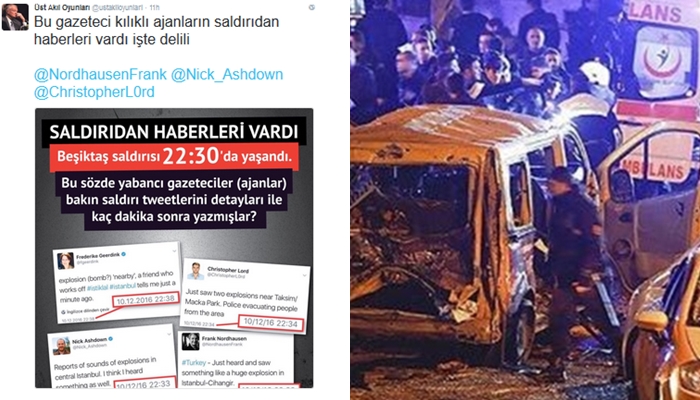 Foreign journalists were targeted by pro-Erdoğan trolls and media for their tweets reporting on twin bomb attacks in İstanbul immediately after they occurred on Saturday night.

A campaign on social media was launched by a troll with more than 134,000 followers, @ustakiloyunlari, who wrote, “These journalists, like agents, were aware of the attacks,” with a photoshopped picture showing the time of journalists’ tweets after the blasts.

“#Turkey – Because I reported the Istanbul blast yesterday on Twitter I am now the aim of a terrible shitstorm by Turkish nationalists,” said Nordhausen in response to the campaign.

Ashdown tried to inform Twitter about the campaign, writing: “Dear @twitter, this account is accusing foreign journalists in Turkey of being agents, resulting in threats from his many followers.”

A few minutes after the explosions Nordhausen tweeted “#Turkey – Just heard and saw something like a huge explosion in Istanbul-Cihangir,” while Ashdown also tweeted: “Reports of sounds of explosions in central Istanbul. I think I heard something as well.”

This is not the first time foreign journalists have been targeted by trolls and the government.

“Shameless, immoral, treason,” said President Recep Tayyip Erdoğan of an article by New York Times reporter Ceylan Yeginsu about the recruitment of Turkish citizens by the Islamic State in Iraq and the Levant (ISIL) terrorist group.

After CNN’s Ivan Watson was detained during a live broadcast from the Gezi Park protests in Istanbul in 2013, Erdoğan accused him of “working like a spy.”

Erdoğan also went after the Economist’s Turkey correspondent, Amberin Zaman, for her remarks on a TV show: “Shameless militant disguised under the name of a journalist.”

Selin Girit, a host on the BBC’s Turkish service, was another journalist targeted by Erdoğan, who said, “Part of a conspiracy against her own country.”

Turkish Interior Minister Süleyman Soylu attacked French journalist Olivier Bertrand, who was deported by Turkey last month after three days of detention, saying he was sent to Turkey to stir up unrest on the Syrian border.

Last month two Swedish journalists were also temporarily detained by police in the Kurdish province of Diyarkabır in southeastern Turkey.

Lindsey Snell, an American freelance journalist detained by Turkish security forces on Aug. 7 as she crossed into Turkey from Syria and accused of having illegally entered a restricted military zone, was released in October after two months’ detention in Turkey.

Finnish journalist and writer Taina Niemela was deported from Turkey in April on charges that she had been involved in “spying activities.”