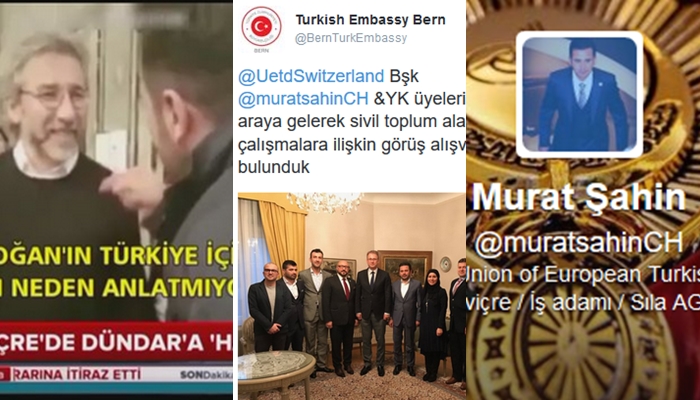 Turkish journalist-in-exile Can Dündar was verbally attacked by the head of the Union of European Turkish Democrats (UETD) during a program in Zurich on Friday.

“Why do you not talk about what Mr. Erdoğan has done for Turkey? You are a traitor,” said Murat Şahin, head of the UETD in Switzerland, in a video taken following a panel discussion at a Right Livelihood Award, also called the “Alternative Nobel Award,” event.

In the video Dündar sarcastically says, “I am already talking about where Erdoğan has taken Turkey,” before somebody else tries to physically interrupt Şahin.

The video ended with an altercation, but Şahin said he was well in a Twitter message in response to the Justice and Development Party’s (AKP) Sultanbeyli Mayor Hüseyin Keskin, who congratulates the UETD head for his words against Dündar.

Dündar, the former editor-in-chief of the Cumhuriyet daily, was previously sentenced to six years in prison for publishing state secrets involving Ankara’s Syria operations. He left Turkey earlier this year, and a warrant is currently out for his detention.

The Turkish Embassy in Bern stated in a Twitter message on Nov. 25 that Ambassador İlhan Saygılı had met with Şahin and board members of the UETD at the embassy building.

“The first organization is the Union of European Turkish Democrats [UETD], founded in Germany in 2004 but later expanded to other European countries — France, Belgium, Austria, Netherlands and the UK. It has been totally transformed into an Islamist grassroot base for Erdoğan. The organization, working closely with Turkish embassies, is an important vehicle in delivering results for Erdoğan from get-out-to-vote campaigns to lobbying activities in European capitals. Turkish government officials are encouraged to spare time to meet and attend events organized by the UETD when they go to Europe. President Erdoğan’s travel itinerary often includes a meeting with UETD officials on the sidelines of his official visits.” wrote Bozkurt in a recent column on the Turkish Minute website.