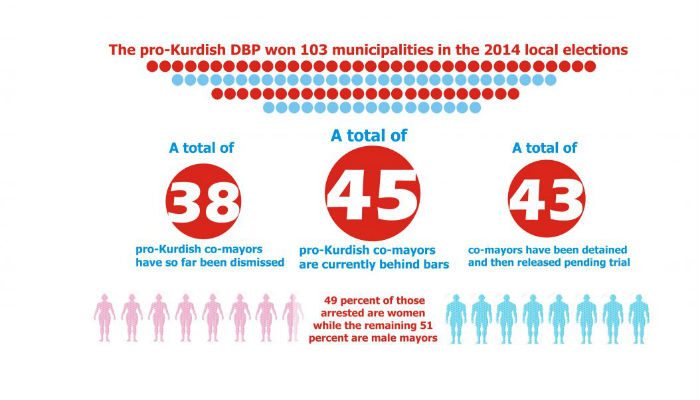 The Turkish government has arrested a total of 45 co-mayors from the pro-Kurdish Democratic Regions Party (DBP) in the past couple of weeks and has seized the administration of 35 municipalities, replacing 38 Kurdish mayors in eastern Turkey.

The DBP won 103 municipalities in the recent local elections, which were held on March 30, 2014, with some repeated on June 1, 2014. However, as Turkey has stepped up political pressure on Kurdish politicians in recent months, the government has appointed trustees to the management of 35 municipalities, arrested 45 co-mayors, and 10 deputies from the pro-Kurdish Peoples’ Democratic Party (HDP).

In one of the most recent examples, on Dec 3 Turkish police detained the co-mayors of three districts of Turkey’s southeastern province of Hakkari as part of counterterrorism operations, officials announced.

With the detention of the mayors, there are now no democratically elected administrators left in the province as a total of three Kurdish deputies from HDP have already been in prison for weeks.

On Nov. 4, Turkish courts arrested nine HDP deputies including the party’s co-chairs, who were detained in the early hours of the same day following police raids on their homes.

Three days after the arrest of the nine HDP deputies, Turkish police this time detained HDP deputy Nihat Akdoğan in the southeastern province of Hakkari. Akdoğan was later arrested by a Turkish court and jailed pending trial. (TurkeyPurge)