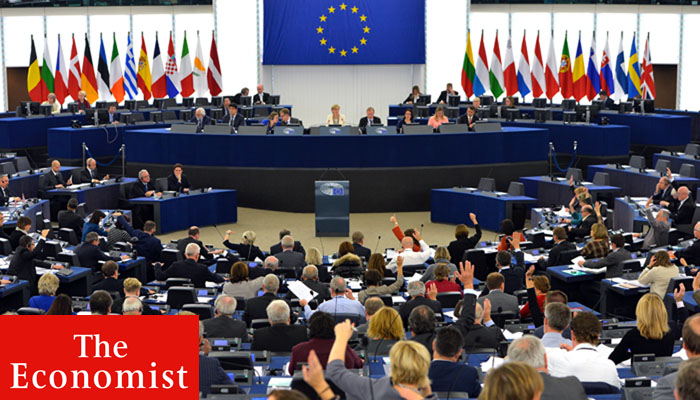 The London-based Economist weekly news magazine said in an article on Saturday that an acrimonious breakup between Turkey and the EU appears to be just a matter of time as Turkey’s current President Recep Tayyip Erdoğan, who is threatening European leaders with opening the path to Europe to 3 million refugees, is very unpopular among mainstream EU politicians.

However, The Economist stated that despite the fact that French, German and Dutch politicians are wary of indulging Erdoğan, they fear another refugee crisis prior to upcoming elections, and many are also reluctant to jeopardize investments in Turkey.

What follows is the full text of The Economist article, titled “Turkey’s effort to join the EU is on life support”:

JUST before the Gulf war in 1990 (which he backed despite popular opposition), Turgut Ozal, then president of Turkey, squeezed into an army tank, posed for the cameras and proclaimed: “I am taking the shortcut to the European Community.” A quarter-century later Turkey’s dream of joining the European Union is all but dead. Denouncing the purges that followed July’s brutal coup attempt, on November 24th the European Parliament called on EU leaders to freeze accession talks, which have been dragging on since 2005.

Turkey’s current president, Recep Tayyip Erdogan, responded the next day by threatening to open the route to Europe to the 3m refugees living on his side of the Aegean. “You have betrayed your promises,” he said, referring to a deal with the EU that commits Turkey to harbouring the refugees in exchange for billions of euros in aid and a promise of visa-free travel to Europe for Turkish citizens

Leaders of EU states, who will discuss Turkey at a summit on December 15th, are unlikely to take the parliament’s advice. Mr Erdogan is very unpopular in Europe, and mainstream politicians in France, Germany and Holland, all facing elections next year, are wary of indulging him. Yet they fear another refugee crisis even more. Many are also reluctant to jeopardise investments in Turkey. “If you rock the boat too much,” says Marc Pierini, a former EU ambassador to Turkey, “you are putting your own economic interests at stake.”

Yet the current relationship is not sustainable. European support for Turkey’s accession has plummeted. The membership talks are going nowhere. In over a decade, the two sides have opened only 16 out of 35 negotiating chapters. Eight chapters are blocked over Turkey’s refusal to recognise Cyprus, and are likely to remain so: reunification talks between the island’s Turkish-occupied north and its south broke down on November 22nd.

Mr Erdogan views accession to the EU as Turkey’s right because of its strategic importance. If there were ever a shortcut to membership, however, he has not found it. Today his government is openly flouting the EU’s rules. Of the 37,000 people arrested since the July coup, including over 100 journalists and a dozen MPs from a pro-Kurdish party, only a handful have been formally charged. Some 120,000 others, including nearly 16,000 in the past week, have been sacked or suspended. Allegations of detainee torture are mounting, though Turkish officials deny them.

Mr Erdogan has backed calls to reinstate the death penalty, a red line for both the EU and the Council of Europe. On November 20th he suggested that Turkey consider the Shanghai Co-operation Organisation, a group that includes Uzbekistan, Russia and China, as an alternative to the EU. He has also threatened to put the accession talks to a referendum in 2017.

Turkish officials have been accusing the EU of double standards for years, with some reason. Many European leaders, from France’s ex-president, Nicolas Sarkozy, to Germany’s chancellor, Angela Merkel, saw no place in the EU for a Muslim country of 80m even when its democracy was in better shape. None rushed to Ankara to denounce the coup or offer support for civilian government.

Yet the language coming out of Ankara has become gratuitously hostile. Mr Erdogan accuses the West of siding with the outlawed Kurdistan Workers’ Party (PKK)—and even with Islamic State. His foreign minister brags about refusing to take phone calls from his German counterpart. Pro-government newspapers claim, without evidence, that Western officials are plotting against Turkey. European diplomats warn that the damage may be hard to undo. “The longer this lasts, the more the EU will close itself off,” says one. “The only way Turkey can prevent this is to turn down the volume and put a stop to the crackdown.” Yet at this rate, an acrimonious break-up between Turkey and the EU appears to be just a matter of time.