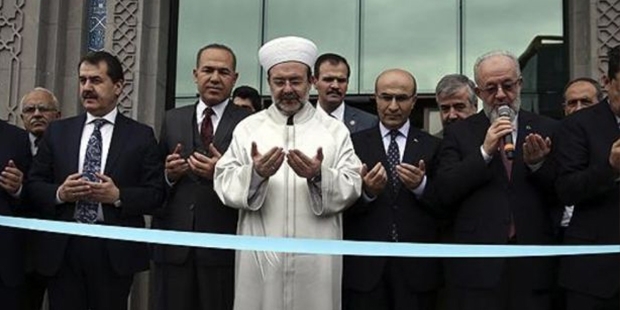 The head of Turkey’s Religious Affairs Directorate (Diyanet), Professor Mehmet Görmez, on Tuesdayinaugurated a mufti’s office in the southern province of Adana that had a price tag of TL 6.6 million, hours before a deadly dormitory fire broke out and claimed 12 lives, Turkish media reports said on Wednesday.

Ten schoolgirls, a child and an instructor perished in the fire.

According to preliminary findings the fire, which also injured 22 others, was caused by an electrical fault in the building, where 34 female students from low-income families reside, Adana Governor Demirtaş told the media.

The construction cost of the mufti’s office has raised eyebrows at a time when students from low-income families have fallen victims to the fire.

Professor Görmez and the Religious Affairs Directorate are being widely criticized for extravagant spending as Islam promotes modesty. Görmez attracted much criticism for his use of an official car worth TL 1 million ($435,000).

The purchase of a Mercedes S500 sedan for Görmez, in addition to 14 Toyota cars for the Diyanet’s general directors and 16 minibuses for general use, drew an angry reaction the public after the news broke last year.

The directorate announced in December 2015 that the purchases had been made with state funds, not with citizens’ private donations.