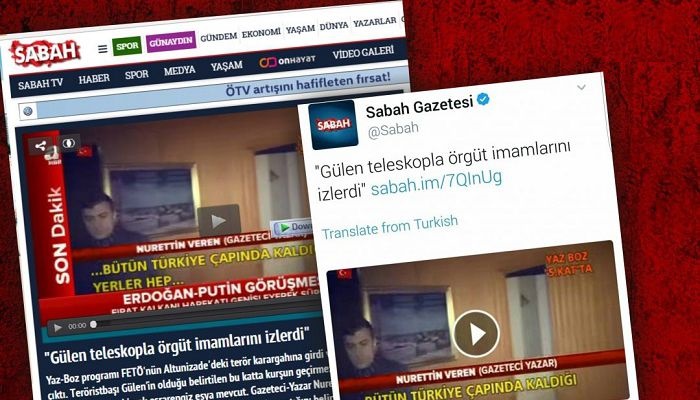 US-based Turkish scholar Fethullah Gülen had a “rocket-resistive” building near İstanbul’s famed Çamlıca Hills, where he constantly “monitored his followers with a telescope,” the pro-government daily Sabah reported on Saturday.

According to the report, Nurettin Veren, an informant who had turned against Gülen, claimed that the building was Gülen’s “secret place” to live and give instructions to the people affiliated with the Gulen movement. Veren argued that Gülen was given a telescope as a gift, which he later used to monitor followers on the pretext of “watching stars in the sky.”

Veren also claimed that Gülen invented curtains “made of water droplets” to maintain sound insulation and that the building was covered with “rocket-resistive glass.”

Gülen has been in self-imposed exile in the US since 1999. Turkey survived a military coup attempt on July 15 that killed over 240 people and wounded more than a thousand others. Immediately after the putsch, the Justice and Development Party (AKP) government along with President Recep Tayyip Erdoğan pinned the blame on the Gülen movement.

Gülen and the movement deny the accusations. (Turkey Purge)